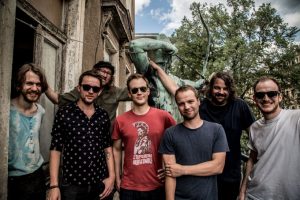 It’s always a beautiful feeling when you listen to something new with influences from the psychedelic past. Sir Robin & the Longbowmen comes from Dresden, Germany and lead us to a varicolored psychedelic voyage full of sitar, haunted organ, and fuzz guitar! We find them riding a “Dead Horse” “In The Dark” listening to “Sissi’s Harp” on their “Road to Jezioro Tejsowo”… I think that these guys are ready for big things in our underground community. Let’s meet this 7 piece band who is responsible for one of the top 5 albums of 2016!!!!

TimeLord Michalis: Introduce us the band and tell us how it all started…

It started in 2010 as a fun project in Manuel’s bedroom. He started jamming with an old GDR Organ and two other guys that used small amps for bass and guitar. Later we added a drumkit and were having jams before moving to another rehearsal space in an old shabby cellar. Another guitar player joined in and we convinced Konrad to become our lead singer. We moved away from there very soon after to a slightly more comfortable atelier and played our first show ever in 2011 at a flat share party.
Since then there have been changes with the band members because of several reasons. The setup we are having now is playing together for about a year now.
We released our self-titled debut album in April 2016 on vinyl and tape which is about to be sold out and have been touring Europe last year for the first time as well.

TLM: How about your name? How you got it?

Sir Robin: Manuel came up with the idea after the first rehearsals. First of all, Robin was the only one of the four of us who could play his instrument, so he deserved the name “Sir”. Also, Manu was listening to so much 60s psychedelic music back then and also wanted to play that style, so he just came up with a name suitable for a typical UK Sixties Psychedelic Rock band.

TLM: Tell us about your influences, musically and lyrically.

Sir Robin: We are all having a similar taste in music which you could call the lowest common denominator. Still, each of us is listening to several kinds of music and that’s what keeps our songwriting interesting as well. We are all pretty interested in music recent and old and are digging for new influences by the day. At the beginning and even now we have been compared to “The Doors” a lot which seems strange but of course always felt like kind of a compliment too. There are no such bands that we would call our shining example, at least not regarding writing songs ourselves. In the beginning, our music probably was pretty Sixties-related but on the album as well as with new material we are working on, we can sense a certain development into a more modern style which also comes with the open-mindedness we are having experimenting with sounds, settings, and general concepts… Lyrically the influences we are having are first of all personal matters and thoughts. As a German native band we decided to sing in English, but already with the debut album, we also wrote a song in Spanish and just like to try what we feel could be suitable for a song and what lyrics and language could give more effect to the instrumentals as well.

TLM: Describe your music/sound on your debut album.

Sir Robin: Our debut album is a pretty varied mixture of several Psychedelic styles. This variety is coming from a different approach each of us has writing songs. Typical for music in general, we have been hearing and reading a bunch of comparisons to the songs but also a lot of praise that we didn’t really expect. As we already said, we like to experiment and so that’s probably why the album is quite diverting. The sound itself was the product of long preparation, a lot of work with demo recordings and then finally studio recordings with one of our great friends and a really talented sound technician, Ricardo Röpke.

Sir Robin: This year we will be on tour again in the Czech Republic in April, Switzerland, and Italy in May, and France and Germany in autumn. Despite that, we are working on new songs at the moment. There are quite a lot of ideas and new material is being put together for our second album, which we plan to release in the first half of 2018. 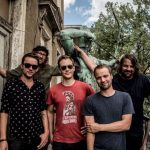 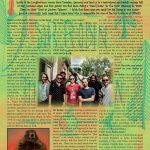