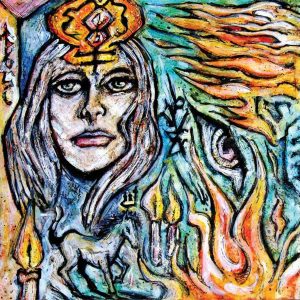 What an incredible astonishing debut album is this? Less than 3 years as a band, this Athenian Quintet managed to surprise the whole Underground PSYCH scene, but not only! “Archetypes” shows a great musicianship, with well worked and structured songs, impregnated with proper doses of toxic Cyanamide Acid, flirting with Progressive, Folk, Psychedelia, Dark Wave, even Traditional Greek Music, acting like a ‘ritual’ while their influences are so many and different from one track to another! From the Door-ish Post-Dark-Neo-Psych “Horse Dark As Night” and the Sabbathic proggy atmosphere of a Barrett body trapped in ancient Greece “The Lunatic”, to the dark gothic spirit of Nick Cave “Ode To The Absent Father” / “There Will Be A Time” and the Groovy Sharp funkiness of “Snake”. From the Greek vastness of “Nothing We Can Do” to the stand out track the garage-o-delic “Lilith”. THIS IS A Landmark album for the future generation!!! (TLM)

Label: Not On Label (Self-released)

Check another track from their Album, the stand-out Garage-O-Delic “Lilith”