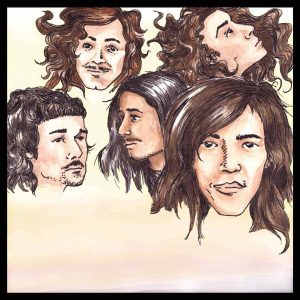 A promising Californian band, formed in 2012, with 2 exceptional 7” singles and 2 albums, this one being their first LP vinyl release through Rad Cat Records (their first one “Nico… And Her Psychedelic Subconscious” was a CD/Cassette only release through Burger Records). So, what we have here is 2 Sides, slightly different. On side A, we meet the sunny Californian Vintage Pop-Sike sound of the late 60s early 70s, organ-dominated upbeat melodies with lots of synth sounds and a few “la la la las”. On side B, they’re getting rid of their ‘pop-costume’, trying on their ‘dark-psych’ one, the organ becomes more trippy, fuzzy tunes make its appearance, adding a few proggy elements in the scenery while the use of something like a “vocoder” transmutes the psych climate into a hallucinogenic one! Definitely, it’s the side I prefer, it’s the side I met when I heard for the first time their 7” singles “Are You Hypnotized?” and “Nico”… Anxiously waiting for their next move… (Dr. Floyd)