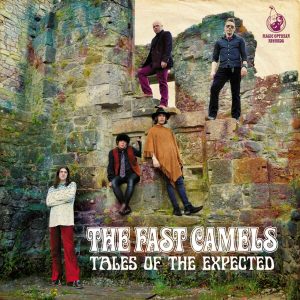 Coming back with their third album, The Fast Camels give us a piece of art in an LP format ready to blow our minds. Clearly influenced by Pink Floyd (Barrett’s years) and of course West Coast, their 60’s psychedelic, power pop beat sound, under lyrics, really dipped in the spirit of this magic era, is really promising. A 40-minute trip crossing the Atlantic Ocean, starting from UK, Glasgow and landing on the sunny west coast. A blend of Pretty Things, psych-pop period and little drops of “Forever Changes” in its entire, this album comes to bring the sound of the past in the present. The songs are played in such order so that the trip starts, withdrawing from reality, meeting a different kind of persons and their stories, continues as it passes from a lunatic asylum (Madame Matron), speaking about time and space with the “Watchmaker” and ends after landing thru the echo sounds of an excellent guitar solo, still searching for “Flinkplantsoen”. Surely an album that will please every follower. (TimeLord Edgart)

Buy the album directly from the Band: