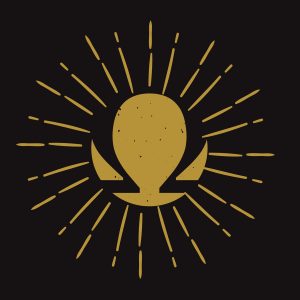 Omega Ray is the latest new thrilling adventure of George Karanikolas (The Last Drive, Blackmail, BLML, Drobs) with the help of Stefanos Flotsios (The Last Drive, Screaming Fly), Mono Kaktos (KRAAK) and Kostas Loukopoulos (Screaming Fly). After the first ‘shock’ of the Greek lyrics, the music of the album, literally, hit me like a thunder on a clear sunny day! 5 tracks in total (from 6:00 to 18:13 min) offering an unpredictable dynamic strong dose of Psych, Acid Rock, Folk and Blues, dressed with George’s poetic Greek vocals, enclosing Floyd’s early 70s progressive experimentations, Sun Ra’s magic, Amon Duul II’s darkness, New York’s late 60s rawness… Under a feel of inspirational improvisation, their influences are so many but so amazingly absorbed and distilled by the whole unit that the final result leaves the listener with a glorious feeling of euphoria and wonderment! Sound Effect records released it on 2 limited vinyl editions (300/black and 100/clear) and on jewel-box CD (featuring a longer version of “Etna”, 20:17min) It rightfully earned a place next to PLJ’s “Armageddon”! (TLM)

Includes inner with lyrics in Greek and English plus download coupon.
Sticker on the front with liner notes.

Both CD Editions include an 8-page booklet with lyrics in Greek and English.
Sticker on the front with liner notes. Features a longer version of the final track, “Αίτνα”, clocking at 20:17.Released: 19 May 2017