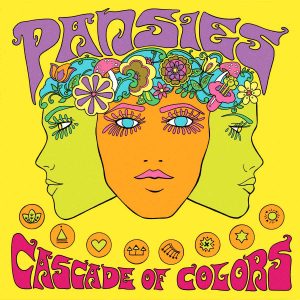 Though the Pansies debut album released towards the end of 2017 (November), I was so much impressed that I include it among my Best Albums of 2017 (No. 7!!!) Pansies are a Psychedelic Baroque Trio (Arash Mafi, Victor, Alex Wintersmith) hailing from Salt Lake City, Utah. “Cascade Of Colors” was recorded in various sessions from December 25th, 2015 to June 6th, 2017 at Pansies home-made studio. All 9 tracks of the album were bounced to ¼” tape and send off to Fran Ashcroft (Happy Beat Recording & Mastering) in Liverpool, England, to be mastered for vinyl, and this explains much! Analog from the start to the end! So what we have here is a deeply 60s inspired band flirting with Baroque Psych, Organ dominated songs with dreamy floral vocals. Side One opens with “Feels Like Yesterday”, a moody melancholic kind of psych ballad while the dominant organ takes us back to the heart of British 1967 where the nostalgic “Whiter Shade Of Pale” was hitting the Pirate Airwaves. “Golden Day” is deeply influenced by Moody Blues (67-68 era of course!) adding some of Procol Harum’s progressiveness. “Green Apple Eyes” is only adding a little late 60s Californian sunshine to the moody scenery. And side One closes with one of the coolest neo-psych tracks I heard a long time ago, the keys have processed my mind from the first time I heard this tune! It’s called “Crystal’s Nightmare”. Side Two opens with a huge dive into the most melancholy moments of late 60s Aphrodite’s Child, the song is entitled “Shoreline Of Your Mind”, its telepathic vibes are so strong that it really moves you back to time. “Hobbit’s Song” has the familiar-by-now moodiness but with a slightly more reverbed electrified background. “Strange Dreams” is another moody ballad drenched into melancholy while the album closes with “Another Time” a prog-psych ballad, a farewell track that makes me longing for the moment when my turntable’s needle hit the grooves of Pansies next LP record! Despite the melancholic vibes all over the album, “Cascade Of Colors” combines the genius songwriting of Sagittarius’ Carl Boettcher, the melodic side of Gandalf’s Peter Sando and Procol Harum’s melancholic progressiveness, leading me to characterize Pansies as the brain “Aphrodite’s” child of The Moody Blues!!! (TLM)