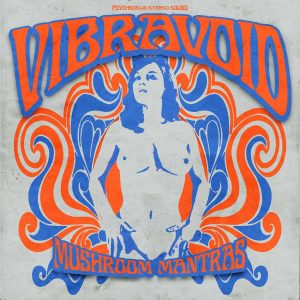 Here is the record that will blow your mind and wear off your turntable. Never before an album of this calibre has left Düsseldorf – and this is mighty difficult to do with Kraftwerk and NEU! from this town, but “Mushroom Mantras” could make Düsseldorf: Vibravoid City! Psychedelic Rock is a much-misused term these days and applied to many musical genres, in fact, “Mushroom Mantras” is one of the few REAL PSYCHEDELIC recordings to be released the last years due to the fact that Vibravoid existed before the term got fashionable among hipsters. “Mushroom Mantras” are, in the Buddhist tradition, small mushrooms that are painted with blessings and prayers and so is the full album, a splash of psychedelic sights and sounds that makes love with the universe. 7 brand new ‘chants’ with an abundance of electric sitar of which 2 are sung in Sanskrit offer trip full of colours, Kosmische Musik and way out sounds that are second to none. “Sarveshaam Svastir Bhavatu” and “Om Gang Ganpataye Nama” are 2 Modern Age Groovy Psychedelic Mantra Ragas that combine the tradition of European Pop Psych and ancient Indian prayers. The Groovylicious “The Legend Of Doctor Robert” features an excellent use of Mellotron and lots of mind-blowing backward sounds that awake thoughts of the famous 60’s Psychedelic Doctor that was first introduced on the Beatles “Revolver” album. “Echoes of Time” with ear cutting Fuzz guitars and distorted psycho-anomalous rhythm feels like acid running through your brain! Didn’t know that ‘Acid’ could be so ‘Sweet’! “Apollo69” is a killer track that takes the Electric Sitar into Space in less than 3 minutes! “Purple Pepper” is an acid-drenched moody Psychedelia combining a feeling of nostalgia but adds the number of distortion sounds that only a “Vibra-Generator” can provide! The longest track “The Orange Coat” closes the album. There’s a New Dawn. Sun rises. The electric sitar is chanting with the birds while I catch myself picking up mushrooms in the Garden of Eden, this is dreamy and floating Raga Rock of a new order and a trip into the world of the flower children. It’s simply amazing, how close Vibravoid get to the 1967 sound with every new release! The CD contains 3 bonus tracks from a 1992 recordings session, which indicate the visionary attempt to re-create the Kosmische Musik that defined the German Krautrock at a time when this music was best forgotten. Many bands seem to copy the visual style of the 1960s but musically offer the music of the 1980s – Vibravoid is not only an original that is well copied, too – Vibravoid is something that can really blow your mind if you are willing to turn on and tune in! (TLM)

The complete run is limited to 1000 copies,
the preorder edition from the label includes a poster with cover artwork
and the numbered picture disc postcard single.
The single is limited and numbered to 200 copies.