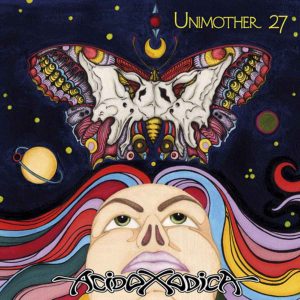 Piero Ranalli, my beloved multi-instrumentalist ‘neighbor’ from Italy, is back with another promising album after 2015’s “Frozen Information”. Starting his solo travelogue adventure back in 2006 – right after his Areknamés’ withdrawal (fuck-an-A- Italian Canterbury style prog band) – this is his 6th album release under the Unimother27 moniker, released through his own Pineal Gland Lab. Generally, “AcidoxodicA” is less progressive than its predecessor but more experimental in a krauty-psych way. Album takes off with “Ossesso”, the electric guitar creates a lysergic acid sound, becoming really trippy with an intense Eastern inspired sounding in the middle, till the acid guitar take the ‘lead’ once more. The guitar outbursts continue on the following 2 tracks “Opporti A Me Non è Mai Troppo” and “Allunare Era Nulla” while “A Valle Tra Masse Essa Martellava” is a little more trippy tune. “E’ Corta E Atroce” indicates a futuristic percussion full of experimentalisms till the ‘usual suspect’ – the Guitar – makes its stoned entrance! “Arte Tetra” has a funky intro, still improvised, that leads to a hot ‘dialogue’ between guitar and tubelek. Finally, the album closes with “Eterni Attici Di Città In Rete” in a rather ambient-like atmosphere full of guitar paroxysms! Undoubtedly this album is an ode to Electric Guitar and its various “heady” incarnations! I may dare to place it next to The Human Instinct’s “Stoned Guitar” from 1970! (TLM)

Buy Album directly from the band:

You can check a track from the Album via youtube: