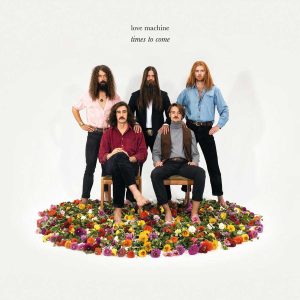 The release sheet by Unique Records – among others – reads: Genre: Americana, Folk-Rock… What? Is there something wrong here? Or there’s a significant ‘turn’ on band’s musical direction? Having in mind their previous 2 remarkable albums (“A Present To The Galaxy” in 2014 and “Circles” in 2016) I was really anxious and curious about their 3rd LP. Yes! I was surprised while I was listening! I guess it was a pleasant surprise and not an unhappy one. The album starts with “Got To Love”, bringing to mind an early 70s Jim Morrison mix with a pinch of the “Hair” musical and a strong Phantom’s Divine Comedy musical feeling! “To The Universe” is an acoustic rhythmic ballad almost unplugged emerging an electric west coast late 60s feeling. “Blue Eyes” has an interesting solid rhythm section and some improvised guitar strings. Side B opens with “Solar Phallus”, indicating an adventurous flute sound with peculiar theatrical almost operatic vocals under a weird trippy folkie background. “Visions” has a creepy atmosphere, scary sounds, sporadic drumming and spacey effects, flirting with prog-rock. The self-titled “Times To Come” is a spiritual kind of folkie semi-acoustic ballad while the LP closes with “Earth, Again” a happy rhythmic tune with a middle section full of improvisational percussions that gradually becomes a jam session. So, after a few listening sessions, I must say that the sure thing about this album is that it’s a mature one, so lyrically as musically. It’s a very esoteric album, and if someday I fix my TimeMachine, I would like to move to the Big Sur, in the early 70s, and listen to Love Machine opening the Fest by playing this album in its entity! (TLM)