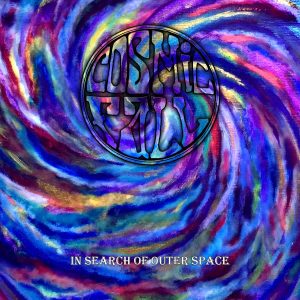 The Berlin-based powerful trio of Cosmic Fall (Klaus Friedrich – bass & vocals, Daniel Sax – drums and Marcin Morawski – guitar) ‘throwing’ to the cosmic sky their 3rd self-released effort, entitled “In Search Of Outer Space”. 43:17 min in total, spread out in 6 songs. Heavy distorted guitars all over the album flirting with stoner and hard rock. Opener “Jabberwocky” despite its heavy glowing start-up riffs, slowly dived deep and deeper into dark superb depths of a tremendous improvisational jam with lots of hypnotic vibes but ending with tons of distorted guitar sounds. Same goes with “Narcotic Vortex”, heavy stoner ‘deserted’ riffs that becoming gradually a trippy adventurous guitar jamming. “Purification” is a more laid-back improvised track while “Lumberjam” is another full-of-energy powerful jam. As the title indicates, “Spacejam” is a spacey jam-track slowly leaving our Galaxy borders entering new horizons. The last song is “Icarus”, it starts with a heavy guitar sound, becoming trippy, with a few lyrics in the middle, and as it gets closer to the sun it becomes more and more electric, like a glowing comet destined to vanish in the atmosphere… Cosmic Fall is an adventurous jam trio recommended to whoever out there dig the 70s Heavy Sounds filtered to the nowadays standards. (TLM)

Buy Album directly from the band:

You can check 2 tracks from the Album via youtube: