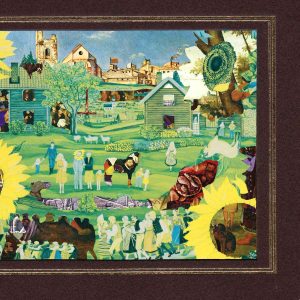 Now here’s a band (quintet) hailing from our ‘beloved’ Down Under that dares to experiment with different and difficult various musical styles! No long Jams, No long improvisations, just ‘structured’ pieces of music, called “songs” (!!!), remember? The Citradels call themselves “an Anti-Psych Industrial Wimp Rock band from Melbourne, Australia”. What? Anti-Psych? Wow! “God Bless” is their 8th Album (All of them are Self Released!) and the band explains: “It abstractly explores themes of influence, religion, and morality through characters from a small town gradually falling out of touch with its surrounds”… So, it seems to me something like a ‘concept’ album, 60s influenced, and I may dare to call it a modern twist of albums like “Five Day Week Straw People” (from the magnificent psych year of 1968). 13 songs in total, combining so many different elements and styles like 60s sophisticated pop, doo-wop, krautrock, dream-pop, country, shoegaze, even Gregorian chants. For instance, “Holy Ghost” is something like a Psychedelic litany! With a ritualistic feeling, based on a haunted church organ accompanied by a Gregorian chant, an esoteric occult spiritual psych tune that lasts only 2:17!!! The self-titled “God Bless” starts as a blistering psych, vocally reminding the late 70s Stranglers, but all of a sudden the track becomes weird and unfolds a 50s doo-wop feeling (early Platters, Drifters etc…). “Roman Holiday” is a Power Pop melodic catchy tune while “GRC” dangerously flirts with the sunny West Coast 60s side of The Byrds and The Beach Boys. Speaking of The Beach Boys, “Post-war Preschool” is an “eerie krautrock experiment” with colorful sonic soundscapes, the bastard son of Kraftwerk and Beach Boys (!!!) All you commercial business people out there, if you want a catchy (1:19sec) melody to dress your product that will instantly stick in people’s mind, then your track is “St. David”! The Psychedelically Glorious “Picture Of Uncle Arthur” follows, with a killer brass section, a typically late 60s British tune! “Milk And Honey” has genius instrumentation while “Sunday Best” trips us back to L.A. and all these Groovy late 60s groups. Album closes with “Dawn Chorus”, a warm almost ethereal melodic tune filled with wonderful harmony vocals. “God Bless” is a thrilling sonic ride through kaleidoscopic sounds, a magic carpet ride, it makes you feel ‘Free as The Breeze’ and it fills you with euphoria and delight… “Delight! Delight! He travels in the beauty of the silver-glowing night”… Goodnight… (TLM)

Label: You Are The Record Company, CITRA008