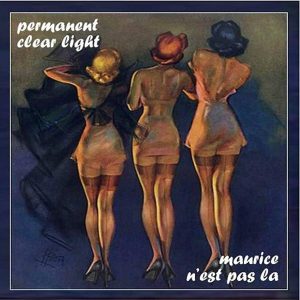 Markku Helin and his psychedelic Finnish vehicle Permanent Clear Light is back with a new 7inch release through the most delicious label of this planet, Fruits de Mer Records. The Single is spinning to 33 1/3 because the 3 songs are almost 16min long! Also, the 7inch comes with two different cover artworks! “Maurice” (8:03) occupies the whole “A” side, for obvious reasons. It’s an interpretation of “Astro-Funk” – as the band states – it’s a rather strange track, an amalgam of cosmic disco psych funk sound with a groovy beat, dynamic solid drumming, burn-like-hell bass guitar, shimmering synth and distinctive theremin! Add to all these the super-wide stereophonic Morse Codes towards the end and you’ll get the ideal soundtrack for an early 80s arcade video-game! Side “B” opens with “One In Five”, a more straightforward pop-rock song referring to a recent research according to which 20% of adult Finns have at some point of their lives suffered from mental disorders. Mellotron, keyboards, bass, drums, fewer guitars, nice harmony vocals and you will “hear the grass grow”… The 2nd and last song is the psych-ballad called “This Quiet Smiling Man”, written for Robert Oppenheimer, extremely topical these days (due to certain idiot Presidents around the world – as Markku says)! The guitar riff reminds me of a druggier “Dark Side Of The Mushroom” while the song towards its end becomes Doors-like! Cool! It’s been already 3 years since “Beyond These Things” LP, so Markku what are you waiting for? (TLM)