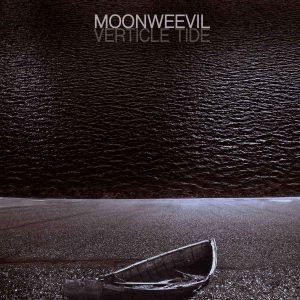 Of course, all you ‘suspicious’ minds out there are aware of Brits Cranium Pie! Right? Well,  what many of you probably don’t know is that the last 2 years the half of The Pie, Mr. Rob Appleton, is relocated somewhere in Austria, and since then he has been working a series of “Library Music Projects”. You may call “Verticle Tide” a natural extension of those projects. Fruits de Mer Records mastermind and main man, Keith explains: “I got in touch with Rob regarding the inclusion of a Pie track on ‘Goldfish’ and in the space of three hours we went from, “might you be interested in having a listen?” to agreeing the release, quickly followed by the cover design and… admittedly a few days later… a bonus CD including all of this album (Verticle Tide) plus another bunch of new recordings. In FdM terms, it’s pretty ‘out there’, hence the ‘strangefish’ catalog number, but if you’ve heard the Cranium Pie Mechanism tapes, I think you’re going to love it.”

The album contains one track, entitled “Verticle Tide”, divided into 2 isomeric parts, occupying 20 minutes on each side! Having listened to both parts, I can surely say that these recordings could definitely be some “lost” parts from the legendary “Mechanisms Tapes”. The music (???) on side one is dangerously experimental, starting in a trippy slow torturous spacey but in a weird ambient way, becoming futuristic, gradually becoming an electronic improvised studio experiment, that is bringing (at least to my mind) the most experimental moments of Future Sound Of London. The scenery becomes ambient emerging an early 80s Brian Eno feeling mixed with a Laurie Anderson “O Superman” background landscape while the weird sounds and effects are adding an isolated industrialized accent… This ‘deserted industrial area’ feeling continues on side B, the extravagant use of sequencer only adds a strong but shimmering spacey feeling to the whole recording! The CD version contains 33 more minutes of experimental improvisational music divided into 8 tracks. Not digestible, no easy to handle and very very very limited. A credible LP for all faithful out there… (TLM)

The Album is not going to be sold in stores. There would be 100 copies available at FdM Records 10th birthday party in Glastonbury on May 12th and Rob Appleton will have 50 copies to sell. Contact with Rob through his Bandcamp page and you may get lucky…

Listen to the Album via their Bandcamp page: