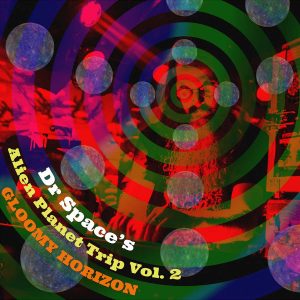 Scott Heller aka Dr. Space – the Driving Force – behind Denmark’s totally improvised Space Rock Band, Oresund Space Collective, is about to release (only on vinyl!!!) the follow-up to his debut album “Vol 1” (March 2017), entitled “Alien Planet Trip Vol 2 – Gloomy Horizon”. Of course, this is album is ‘another’ experiment made in Dr. Space’s Laboratory and Yes it is all improvised and definitely, it could to be the soundtrack to your ears while traveling to a gloomy Alien Planet! The Album contains 6 pieces of non-structured music while the guitars were added later. Like “Vol 1” two guitar players were chosen to add layers. Daniel Lars and Stefan Krey. “A New Beginning” starts the album. The prolonged space effected and a little-distorted intro slowly leaves its place to a peaceful guitar solo jamming while the spacey effects are populating creating a trippy but eerie atmosphere. On “Boogie With Fidel” the guitar keeps on creating electric magnetic fields at the background, spacey weird effects and sounds are still present while the drum-machine tries desperately to put this tune into a ‘normal’ form, but in vain… The only form here, some million miles away from Earth, is the Experimental One! The situation becomes more outlandish with a paranormal track entitled “The Dark Room Becomes Blue”, it’s like 2 different tracks are mixed in one… “Alien Talk” follows and the effects used here surely add an Extra-Terrestrial atmos! “Lost In The Cave” is an over-effected track using a solar sonic soundscape, making the tune really futuristic while the guitar solo still goes on! Eventually, the album closes with the weirdest track of all, the spacey bizarre and dark “Interstellar Violence”, but I’m not sure if it’s going to be included in the LP, probably not… So, if you’re looking for something “different” but Space related, feel free to take this Trip… It is worth it… (TLM)

Buy the Album directly from the Band: