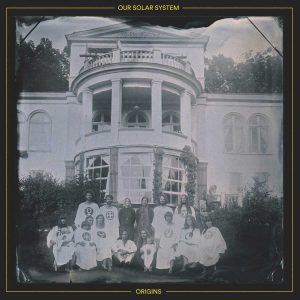 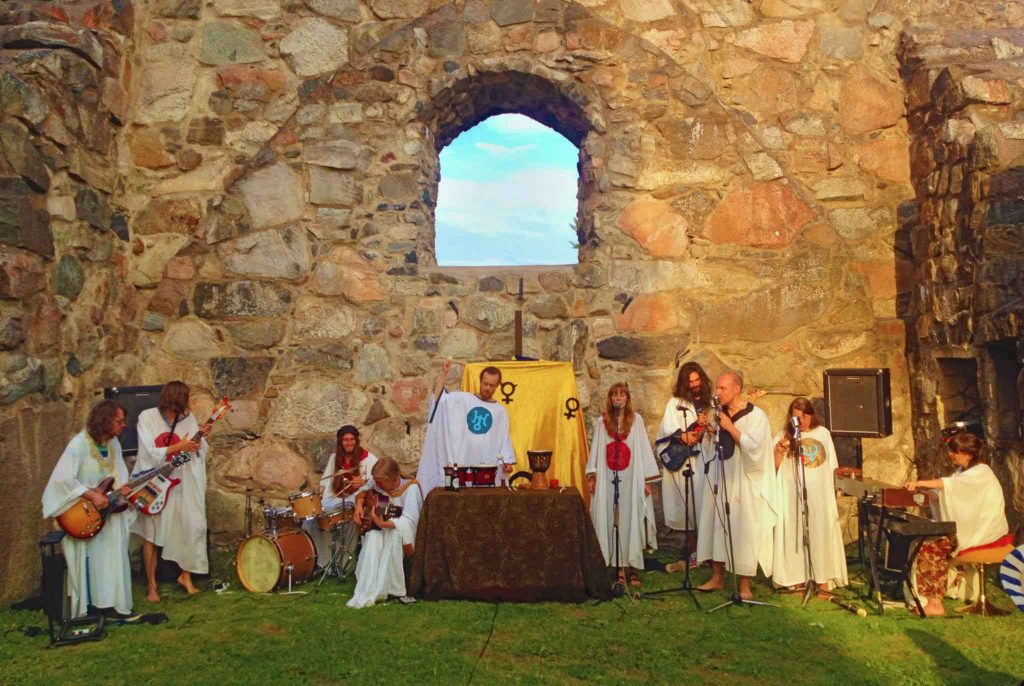 “Our Solar System is a large music collective, a floating crowd of people, where everyone who wants to be part of creating within these cosmic frames is welcome. Our Solar System live is an evolving collective. As long as they are ten planets, they play. Each musician represents a planet, including the asteroid belt and Pluto, and OSS dress in identical outfits adorned with planetary symbols to highlight the concept’s power over the individual”…

Started in 2012, this Stockholm, Sweden based musical commune managed to release 4 albums while “Origins” is their 5th, released through beloved Brooklyn, NY label Beyond Beyond Is Beyond Records. “Origins” contains 5 tracks and after the first listening I got the picture of a Sun Ra meeting with CAN in the studio for a late-night jam session under the guidance of Bo Hansson and Klaus Schulze and I’m pretty sure that Dr. Leary’s ghost was somewhere there… “Vulkanen” clocking to 20:57 occupies – obviously – the whole side A. It’s a long improvisational jam-trip, a heavy pompous cosmic epos with lots of ‘happenings’ inside! At the beginning you get the feeling of an industrialized scene, but the soundscape progressively becomes psychedelic under a mixed minimal krauty vein that transforms into a dreamy n’ peaceful tune emerging a strange bucolic feel (maybe because of the excellent use of the flute) that sets the scene right in the middle of the “Tubular Bells” session. Though the last 5 minutes of the song is a real surprise! The song becomes scary, introducing an amalgam of progressive sounds while the scenery is now shifted from the “Tubular Fields” to “The Man And The Journey” Live act performance! What a Trip! Side B consists of 4 tracks. “Babalon Rising” starts under a ‘mystagogy’ vein with female voices and vocals, introducing a psychedelic drumming beat with a dreamy prog sax ending in a rather atmospheric way transcending the listener to a parallel universe! The band takes the neo-prog spacey path on the cosmic “En Bit Av Det Tredje Klotet”, but the track itself decides to move into a shimmering kraut path. “Naturligt Samspel” is a natural acoustic interlude with lots of birds and tweets, leading the listener out in the fields and far away. How far away? Well, “Monte Verita”, the last track, starts. Probably, we’re in the jungle. But, hey! No! We’re in the middle of a deserted autobahn. Motorik background, groovy upbeat sounds, affected vocals. We’re in the middle of a space-kraut Kosmique dream! The track slowly but progressively culminates! Is this the end? Yes? If so, why I am levitating? Are we at The Edge Of Time? “Origins” is destined to be heard in 100 years from now! Probably far more… (TimeLord Michalis)

Label: Beyond Beyond Is Beyond Records, BBIBR046