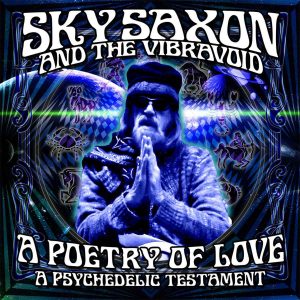 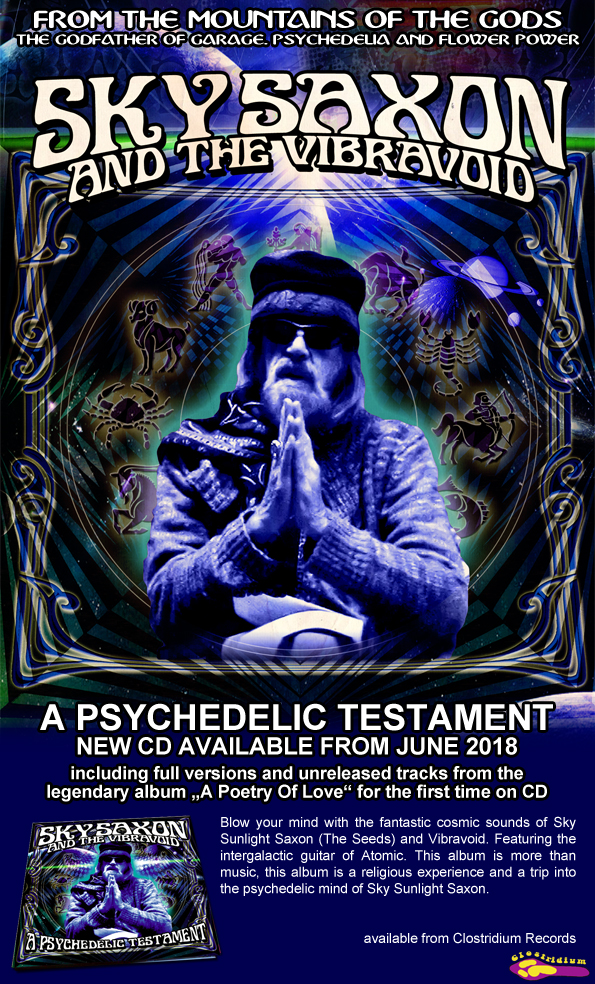 Back in the distant 2008, in Vibravoid City, Düsseldorf, and just 6 months from Sky’s sudden death (25 June 2009), Sky was hanging around there as a visitor and accepter of Christian’s hospitality… It is known that Sky, where ever he was, he never stopped jamming or recording with locals. At various places with the most exciting and ‘underground’ people/musicians… So, it was just a matter of time for Sky Sunlight Saxon and The Vibravoid to start “having fun in the studio”… The recording sessions took place from the 14th till the 22nd of December, 2008… In 2010, Greek label Anazitisi Records, released “A Poetry Of Love”. It consisted of just 4 tracks taken from those recording sessions… The songs were: “A Kettle” Of Tea”, “Look What The Bombs Have Done”, “I See Your Face” and “The Psychedelic Mind Of Sky Saxon”… Fast Forward to 2018… From the same 2008 sessions, 4 more tracks were settled down and the 2nd Part of “A Poetry Of Love” was released, 1st June 2018, entitled “A Psychedelic Testament”, by German label Clostridium Records, including 8 tracks (4 from “A Poetry Of Love” plus the 4 new ones). The 4 old tracks are presented here with their complete versions, originally were edited due to the limited playing time of the vinyl LP! These are probably Sky’s last released recordings. It’s Sky Sunlight Saxon on vocals and percussion. Thomas on bass. Stefan on drums. The Great Atomic on Big Muff guitar. Christian on guitar, organ, theremin, mellotron, percussion. Also, Paul Pott plays bass on “Born To Be Wild” and Paolo plays guitar on “You Can Let Love Start”. Of course, all lyrics are by Sky, except the one cover they do here, the All-Time-Classic “Born To Be Wild”. (I heard a story about Sky meeting someday Mr. Mars Bonfire and expressing him his interest to cover such a cool and significant song as Sky quoted. Certainly, Mars had no problem with that!)

Album takes off with “A Kettle Of Tea”. A low-tempo balladesque kind of song with the most agonizing heartbreaking powerful but so fragile voice of Sky you have ever heard! The guitar work here is inspirationally amazing! A Hymn to Life, to After Life, to God, to After God! Let’s Ring The Bells of Freedom, Of Happiness, of Love! Fire, Water, Air, a Kettle of Tea and Meditate! Paolo does an exceptional guitar work on the acoustic ballad “You Can Let Love Start”, happy and nostalgic, a heavenly tune indeed! “Hey Europe, America! Get your motors running!”… A modernized heavy cover of “Born To Be Wild” follows… Heavy Metal Thunder indeed! The 22:52min anti-war epos of “Look What The Bombs Have Done” fills the room. A psychedelic cry with tons of fuzz guitar exploding in your face making your brains melt… Pure Acid runs through your veins… This Psychedelic monolog under a massive chaotic at times, psych sonic feedback of various instruments, overflows the atmosphere with some of Sky’s magical cosmic energy (those who had met him, know what I mean). Organ, Theremin, Mellotron at his Majesty Service in order to create this psychedelic full of blur and hazy ambience of “Sun King”, it’s like being inside a psychedelic Mantra worshiping The Gathering of the Tribes, of a younger generation! Another beautiful organic psychedelic Sky’s monolog follows, “Wipe Your Eyes” is a kind of improvised psychedelic jam that the rhythm section is seriously kicking arse while Christian is taking advantage of every possible sound effect that his little toys can create! It’s like riding the most dangerous Roller Coaster of the world! This is Modern Cosmic Poetry! Yes, that’s exactly what it is! “I See Your Face” starts, the roller coaster transforms into a Locomotive, the fastest you’ve tripped to! The most colorful train you’ve ever been! Mr. Conductor where are we going? A Cosmic Machine to Paradise… Album closes with Sky urging the listener, the traveler to take this Trip on “The Psychedelic Mind Of Sky Saxon”… What? Is it over yet? 79 minutes and 24 seconds have passed? Thank God, I have pushed the ‘repeat’ button… Another round starts with The psychedelic Conductor, Mr. Sky Sunlight Saxon… Oh, how I miss you man… (TimeLord Michalis)

Get the Album directly from Clostridium Records: