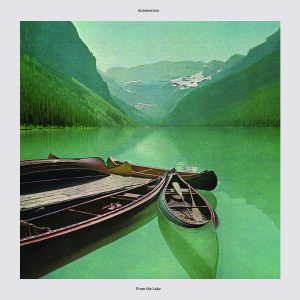 Automatism is an improvisational instrumental band hailing from Stockholm, Sweden, that started back in April 2017. Despite the fact that they are a new band, the members show a remarkable and unique musicianship, it’s like playing for ages together. Maybe it’s because all 4 members have been previously experienced in other bands. It’s Hans Hjelm (Kungens Män) on guitar, Gustav Nygren (New Rose, ex Boras Energi) on guitar, Mikael Tuominen (Kungens Män, ex Switch Opens) on bass and Jonas Yrlid (Partikel) on drums.

Their debut album is called “From The Lake” it is recorded live in the studio with a few overdubs added later and it consists of 6 instrumental improvised musical pieces, covering a specific gamma of the so-called ‘Rock’ music. The opening track “Standing Wave” is a long improvised electric jam (12:41) with the guitar taking a hot lead and becoming progressively spacey flirting with kraut. An adventurous track indeed, not boring at all, a rather trippy tune. “At Sea” is also an electrical jam but emerging a serene floating scenery under an experimental impro musical background, almost meditative. “October Swim” acts like a relaxing ambient semi-acoustic interlude while “Propeller Propulsion” is a sensational Krautrock influenced long track (12:11) getting trippy with a spacey feeling and a really exciting guitar riffing. The atmospheric and Eastern-influenced jam “Floating Downstream” follows and the album closes with the most experimental track of all 6, the krauty-in-a-dark-way “Ice-Floe”. A promising debut, let’s wait for their next step… (TimeLord Michalis)

Listen to the Album through band’s Bandcamp page: