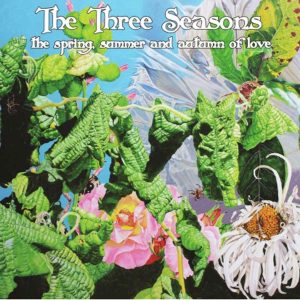 So, what we have here is a “celebration” of the most important creative productive influential 3-years period in the life of the modern music, ever! Of course, we’re talking about the years 1967, 1968, 1969 – though there are a few exceptions here from the ’65-’66 era. Keith “head” of Fruits de Mer Records, had this kind of vision, of gathering new acts and paying a tribute to that specific era that has a strong “mark” upon many of us, artists or not! A tribute to an era that gave us Psychedelia, Acid Folk, early Prog, Mod, Freak Beat… So, there was a gathering of a total of 27 new-to-the-label artists, long-time FdM favorites but also there are 3 acts – not new at all – in fact, these three acts that participate here, they were back there when everything has happened! Keith calls them “The Holy Trinity” and who am I to disagree? Well, it’s really surprisingly amazing how many new bands out there are longing and lusting to interpret covers of their favorite 60s acts. The unbelievable thing here is that most of the times, with these new versions, they’re giving new breath to some old dusty musical pieces of the past! A new life for these compositions that were made by a bunch of people who succeeded to change the world, at least for the short period of one summer…

This triple glorious compilation takes off with The Past Tense covering “Magic In The Air” recorded originally in 1967 by The Attack and not released as a single back then! The song is written by one of the most important figures of 60s London Psych underground, Mr. John Du Cann and I think it’s a good idea (Keith are you copying?) for a future tribute to John Du Cann and his bands, The Attack, Five Day Week Straw People, Andromeda, Atomic Rooster… Anyway… LoveyDove present a new version of a forgotten (to many) theme from a 1967 British comedy film, “Bedazzled” originally by Drimble Wedge And The Vegetations. Made In Sheffield was a band that managed to release just 1 single in 1967, before falling into oblivion, “Amelia Jane” is remembered here by Campbell Stokes Sunshine Recorder. Our beloved crazy-psycho Dutchman Jack Ellister, executes in a fantastic trippy psychedelic way, “Aquarius”, one of the 12 “sign-songs” of the electronically psych flavored “Cosmic Sounds” LP, originally by The Zodiac in 1967. Back in 1967, “Granny Takes A Trip” was banned by BBC, The Purple Gang’s wings were cut off, and Rob Gould is making an astonishing subversive 8:42 min ambient neo-progressive psychedelically drenched new version of this song! Mark McDowell makes a happy full of sunshine cover of The Small Faces’ “Up The Wooden Hills To Bedfordshire” while Anton Barbeau pays tribute to the Ultimate “Sunshine Superman”, Mr. Donovan, with an acoustic mind-blowing new version using a xylophone (if I’m not mistaken)! If you pick up every single stone from the 60s British Underground, you’ll see one name written there, Mick Farren! So, Moonweevil (remember Cranium Pie?) chose “Child Of The Sky” for a dramatically instrumental psychic version, taken from the “Ptooff!” LP, released in 1967 by the Deviants. One of the unknown significant figures of the British Progressive Rock was this guy Don Shinn who recorded a 7 inch single back in 1966 as Don Shinn And The Soul Agents, “A-Minor Explosion” is being reborn here through Kris Gietkowski’s inspiring mystical jazzy-prog reinterpretation! One of the most Psychedelic songs that Richards/Jagger wrote was the 1967 anthem of the British Summer Of Love, “We Love You”, here covered with an electrical psychedelic feel by The Locker Room Cowboys. The 1969 hippie anthem “White Bird” (though it was written in 1967) originally by It’s A Beautiful Day, finds a new lovely version with King Penguin. Aunt Cynthian’s Cabin covers a classic one, giving it a rockier tinge, “Solitary Man”, originally by Neil Diamond from 1966. My favorite Chicago – relocated to Detroit – band The Luck Of Eden Hall surprised me in a pleasant way by choosing an Alice Cooper track from 1968, “Reflected” has been reborn from its majestic ashes! One of the songs that colorfully painted the whole 60s British Underground was the magnificent “Kites” psychedelically wonderful executed here from The Honey Pot, originally recorded in the US by The Rooftop Singers but it was a big hit in the UK, in 1967 by Simon Dupree And The Big Sound! One of the best modern Progressive rock Electric ladies (in this Land – got it?), Cary Grace, gives a remarkable 14:31 min proggy cover version to Jimi’s “1983 (A Merman I Should Be…) Are the Sidewalk Society the reincarnation of The Action in our days? Another “proof” is their tremendous cover to The Action’s “A Saying For Today”, recorded originally in 1968, but released many years later. A meritorious representative of the modern US prog-rock is Mr. Jay “Awesome” Tausig, who gives rebirth to this old traditional “Let No Man Steal Your Thyme”, influenced by The Pentangle‘s version from 1968. Canterbury Sound revisionists superb Magic Bus cover Byrds “Tribal Gathering” taken from their magnificent 1968 LP “The Notorious Byrd Brothers” while proggers Proud Peasant reimagining “Down At Circe’s Place”, originally by the progressive American act Touch and their self-titled LP in 1969. Back in 1966 Jeff Beck and his Group recorded one of the best instrumentals in the modern history of music (with many musicians involved) and Icarus Peel brings “Beck’s Bolero” to the 21st century with a proggy electrified mind-blowing version! Not many people outside UK are aware of the acoustic-guitar-man John Martyn, though he released numerous records from 1967 till his death in 2009 (and also after his death), The Green Ray are paying tribute with a version of “Dusty” originally from John’s 2nd LP on island records “The Tumbler” (1968). “Music In A Doll’s House” is one of the greatest British LPs of 1968 released by Family – a psychedelic progressive rock band – and Ex-Norwegian makes a modernized version of “Winter” from that album. Another forgotten amazing track entitled “Fly” (originally by J.K. & Co released in “Suddenly One Summer” LP in 1968) gets here a tender psychic treatment by Consterdine! The Gold Needles takes us back to the hippie era with a beautified cool version of “The Smell Of Incense” originally released in 1967 by The West Coast Pop Art Experimental Band! As far as it concerns the “holy trinity”, The Yardbirds are covering their own “Think About It” (originally recorded in 1968) Live from 2016, while The Pretty Things are ‘shooting’ themselves with a version of “Loneliest Person”, also played live, recorded at Half Moon in 2010 (originally from 1968’s S.F. Sorrow). Last but not least, The Electric Prunes are paying their own tribute to Arthur Lee’s Love with a version of “7 And 7 Is”, taken from Prunes’ album “Artifact” from 2001 (the song was originally recorded in 1966).

So, this is PROBABLY THE BEST TRIPLE LP COMPILATION OF 2018! Can you dig it? Far Out Man… Peace… (TimeLord Michalis)

Buy the Album through Heyday Mailorder (outside UK customers):

Mark McDowell & Friends cover Up the Wooden Hills to Bedfordshire by the Small Faces. Video created by Mark McDowell!

More videos for your own pleasure (all taken from the 3LP compilation “THE THREE SEASONS”: