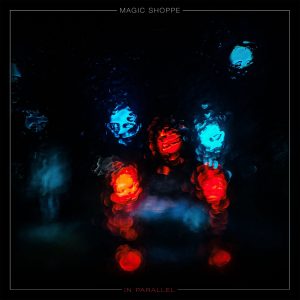 Well, it seems that for the last 9 or so years, Magic Shoppe from Boston, Massachusetts, are living in a parallel universe with London, England! How else can you explain that they did not sound like an American band at all? We’re not going to discuss here if this is a good thing or not. Having released “Reverberation” on CD in 2010 through Optical Sounds and “Wonderland” on LP in 2016 via Little Cloud Records, this is their 3rd effort launching a collaboration between the 2 continents since this is a joint release between Little Cloud Records from the US and Cardinal Fuzz from the UK! “In Parallel” consists of 8 tracks (from 3:21 to 7:12min) moving into the deeper depths of modern hypnotic and reverberating indie-shoegaze rock melting The Velvet Underground’s dark aesthetic with Spacemen 3’s grandiose psychness, blending fuzzy n’ distorted guitars, tremolo & wah-wah effects, harmonic overtones and drones, softly sung hazy vocals… The album takes off with the electric guitarish hazy “White Coat Syndrome” with tons of noisy psychic feedback towards its end. “These Boots Are Made For Dying” is groovy n’ fuzzy with a modern psych new age twisted trippy sounding while “(un)Sound Mind” dives deep into a more slow heavy fuzziness shameless flirting with shoegaze. “First Frame Black” with its hazy industrialized abandoned noisy background motive, reminds me other North European acts that shined back in near past, like Sigur Ros or Mogwai. Of course, Magic Shoppe didn’t have to cover The Velvets in order to prove how important Lou Reed’s band is in their sound, but here they make a modernized cool fucking awesome reinterpretation of “Heroin”! “Interstellar Car Crash” brings a little on-going psychness to the whole musical concept so far. “Fuckstrated” is a fuzzy perverted romance between Alan Vega and Iggy Pop while the album closes with “Mercury Addict”, showing a lot of early 90s alt-rock influences, for instance, this track could be a well camouflaged garage-punk version of a Smashing Pumpkins song! In conclusion, bands like Magic Shoppe are “living examples” of how important and how influential were bands such as Spacemen 3 and Spiritualized… Recommended… Invest… (TimeLord Michalis)

Check the Album via their Bandcamp:

Buy the Album through Cardinal Fuzz: