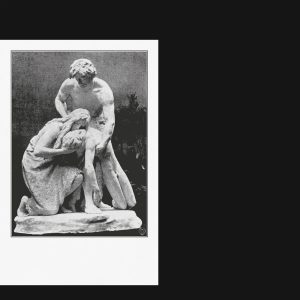 The driving force behind this prog trio from Dusseldorf is guitarist Mr. Jochen Oberlack alias Jean d’Auberlaque. He’s not “new” to the scene. Besides being busy with various musical projects, he runs his own label “Bellerophon Records” and I first came upon him, back in 2010, through a Nasoni Records LP release called “Adventures Under Black Light” by the excellent band Scarlet Utopia, where Jean was a member. So, the new adventure of his is called ÜMIT! With an exclamation Mark!  The Band consists of Jochen Oberlack (guitar, vocals, some synths, and atmospheres), Peter “von Irme” Kirschbaum (bass), Rudolf Kronenberger (keyboards, production) and Peter Schürmann (drums). From 2015 to date, they have released 4 10” EPs (“The Wake of Ümit!” / “The Rise of Ümit!” / “The Curse of Ümit!” / “The Gospel of Ümit!”) and 2 LPs (“The Spirit of Ümit!” was their first album and “The Testament of Ümit!” is their second, released February 2018). The Testament of Ümit! is mainly influenced by 70s Progressive Rock, but they also blend space and atmospheric psychedelic rock, presenting a pure old-fashioned prog record that sounds amazingly mellow and fresh! The album consists of just 5 tracks varying from 4:30 to 11:30 min. It takes off with “Revelation (Genesis 4-1-24)” a relaxed slow and kind of mystical tune with a narrative religious style emerging a well-hidden pure shiny melody accompanied with prog guitars and a low key drumming. With “Into The Mirror Black” the band enters into some serious heavy progressive sounds while the heavy riffing continues with “Hog Dead”, with a gentle charming pop-prog touch and some wonderful distinctive 70s heavy organ – Ι can only imagine the track blasting off the space if it was dressed with more of that addictive organ sound! Time to bring Floyd into the proscenium with the magnificent “Cows (Simmental Breed)”, a Floyd scenery (bringing to mind moments from “Animals” and from “The Division Bell” (especially the song “What Do You Want From Me”), add a relaxing electrified solo plus some early 80s ELOY synthesizer musical shades and you’ll get – in my opinion – the highlight of the album! Last track is “The Deer (Psalm 42 Revelation Reprise)” that somehow continues from where exactly the first song stopped, ending the album in an easy mellow relaxing way, leaving you with a feeling of euphoria and gratefulness! With the next release, TBA for January 2020, Ümit! will make some slight corrections: Dropping the “!” is one, and an increase of vocal appearances is the other. The Title for the upcoming new record is “A Pillow of Dreams”. So, till then, you’re advised to “accept” The Testament! (TimeLord Michalis)

Check the Album via Umit! Bandcamp: