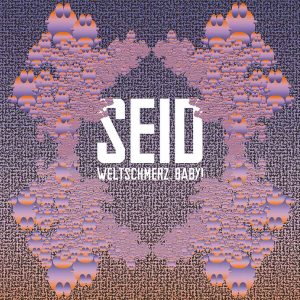 The Sulatron press-release reads: “When Sulatron started again, in 2006, release number one was the second Seid album “Creatures of the Underworld” on CD! Later, in 2012, their fantastic debut album “Among the Monster Flowers Again“ got a 10 years anniversary edition on vinyl via Sulatron. All is sold out in the meantime. For us, this outstanding band from Trondheim is one of the very best bands ever from Norway! Now we are proud to present you their new killer psychedelic rock album Weltschmerz, Baby!”…

If I’m not mistaken this is 5th album by these Norwegians that started out as band back in the 90s dealing with prog, space, psych even folk rock presented through their own unique musical Cosmic prism! So, “Weltschmerz, Baby!” is Seid‘s new album and this time they decided to dress their compositions with lyrics sung in their native language! The album consists of 7 songs clock-ticking to a total of 39 minutes. “Haukøye” with its powerful drumming and the tribal rhythm shows a heavy attitude that flirts at times with the early 90s symphonic hard rock. The weird “Trollmannens Hytte” follows, with an eerie intro some female announcements (or something) under an electro-ambient-psychic- like environment, really experimental but trippy too. Then, a huge spacey bubble explodes with “Satan i Blodet”, the scenery becomes more space-rock oriented but still heavy (with a pinch of psych), a track that is built upon heavy bass lines and some real hot guitar riffs. The self-titled “Weltschmerz, Baby!” has a mystical cinematic somehow intro but soon it transforms into a speedy locomotive! “Coyoteman” is a wonderful addictive druggy tune, tripping the listener to foreign places, a wordless rhythmic tune with a strong psych-a-like soundscape indicating a distorted Alan Parsons Project feeling! “Moloch vs Gud” with its narrative-style is a cool Middle-Eastern influenced song creating a psychic landscape that continues on the next last song of the album “Mir (Drogarna börjar värka)”, mostly instrumental but with a few sporadic female vocals becoming heavy at times but leaving the listener with a pleasant nostalgic feeling and an intense smell of some Norwegian Wood… Lovely… (TimeLord Michalis)

Get your copy through Sulatron Records: