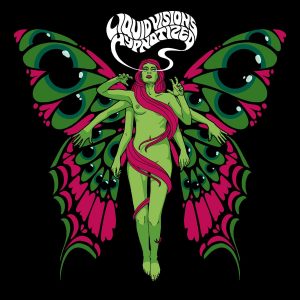 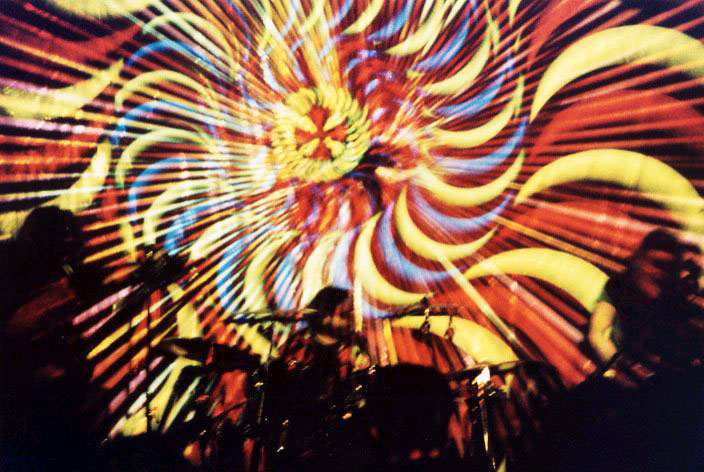 Sulatron Records Press-Release: “Back in 1994, when I (Dave / Sula) was searching for other musicians to found a psychedelic rock band, I met Hans Peter Ringholz.  Later, we found more people to join and were founding Liquid Visions. Over approximately 12 years, many musicians joined and left and many concerts had been played, alongside releases on vinyl and CD on different labels (mostly Nasoni Records). Liquid Visions were kind of a flagship for the revival of neo psych of the 90s in Berlin!
2002, Sysyphus Records released the album “Hypnotized”, which has been recorded in the same year, on CD. But until these days, it has never been released on vinyl, what gets changed now luckily! Back in 2002, “Hypnotized” got many great reviews and the band was playing with bands like Ozric Tentacles, Bevis Frond, Baby Woodrose, Vibravoid and other hip bands from this time. You impressively can hear their influences from the 60s as also long instrumental passages which draw you to psychedelic areas inside your mind! The cover version “Morning Rain” (originally recorded by the French neo-psych-band Third Twyn) gained a massive cult status because of its long and thrilling guitar solos. The fuzzy and 60s-influenced space guitar by H.P. Ringholz got completed wonderfully by Kiryk’s liquid and fancy guitar playing. In 2002, the band exists of:
H.P. Ringholz (ex Zone Six): Vocals, Guitar, E-Sitar.
Kiryk Drewinski (Wedge, ex Magnificent Brotherhood): Vocals, Guitar, Organ.
Dave Schmidt (Sula Bassana, Electric Moon, Zone Six…): Bass, Fender Rhodes, Mellotron.
Chris Schwartzkinsky (ex Johnson Noise): Drums, Percussions.
Katja Wolff: Theremin.”
So, Sulatron Records is re-releasing this masterpiece from 2002, on a vinyl format as Green 180gram in a limited quantity of 500 copies with a new Cover Artwork designed by whom else than the ‘usual suspect’, Mr. Kiryk! “State Of Mind” is a powerful fast tune with a wondrous swirling guitar sound. “Waste” is simply just a cool psych-rock tune. “Butterflight” with its psychic guitar wah-wah craziness becomes a spacey-psych roller coaster which uses Liquid Acid as fuel! “Be Lie’ve” is a deeply Hendrix influenced tune indicating a 60s west coast psychedelic guitar sounding in the middle section of the song that becomes extremely jazzy-psych towards its end! Undoubtedly the highlight of the album is the 10min long “Morning Rain”, lost in a hypnotic hallucinogenic rhythm, it blends some of the mystical Prog mid 70s with the nowadays (2002) Psych Sounding, in a perfect and ideal way, making Liquid Visions‘ version one of the Best Psychedelic-Rock songs recorded during the 00s! The album closes with the 15min long “Paralyzed”, starts in a rather experimental way with various interesting sounds occupying your brain, slowly unfolds into a hazy drunken tune under a psychic-druggy soundscape, until someone opens the Acid Gates and LSD floods the atmosphere and some seriously large doses of PSYCH fill the air! RECOMMENDED! (TimeLord Michalis)

Get the LP through Sulatron Records: