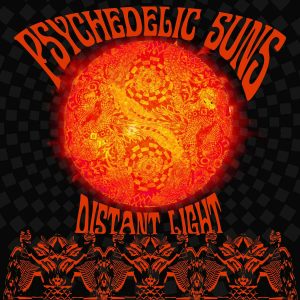 I have to admit that I wasn’t aware of this Finnish one-man-band and thanks to Andreas Krueger from Clostridium Records, I have the opportunity to learn, listen, trip, dive, and explore Psychedelic Sun’s! (Psychedelic Sun’s is Mister Pauli Partanen and when I asked him what’s the use of the apostrophe on his band name, he simply said: “It’s bit of inside joke I have with my musician friends. I’m famous for having misspelling on anything I ever do. So I decided to make misspelling on name too. Originally it was supposed to be Psychedelic Sun, but name was already taken. Maybe I could use the original name now as I’m bit bigger musician already… hehehe…” “Distant Light” is their/his 4th album that initially was a Bandcamp release (released July 11, 2018) soon to be “adopted” by Clostridium Records and released as a CD album with 5 more Bonus tracks! The album is recorded and mixed at PS’s home studio at Tampere during 2017-2018. Psychedelic Sun’s personally think this is going to be best release by far. He have made songs past 2 years and will collect all the best ones to this album and there is about 24 leftovers too!

It takes off with the electronically spaced-out intro “Cold Distant Light” which is mixed with “Rays”, guitar bass and drums are creating a psych-proggy environment, hazy effected vocals, lots of guitar experimentation while the whole thing is slowly becoming a kind of acoustic space-rock elegy! Imagine a Psych-Out version of Santana’s “Jingo” and you’ll get the picture of what’s going on inside “Shine Like The Sun”, a tune that eventually becomes a groovy intergalactic tribalistic danceable anthem! “Hal 9000” is experimental, minimalist, full of sequencers, totally effected that brings to mind an improvised improved and spacey effected version of a lost early 70s Floyd song… The Psychic Spaced-Out “Final Frontier” introduces an astonishing ‘Beat’ becoming a ‘controlled’ improvisational Space-Rock Hymn! “Other Side Of The Sun” starts… and I’m wondering… “Should I try and be more careful with that axe, Eugene?”… Is this song setting the controls for the other side of the sun? Mind-Blowing, Trippy and guaranteed for many Astral Trips! With “Yellow And Green” I’m noticing a more earthly approach to his music, this is a rather weird acoustic ballad! Let’s take a look now at the Bonus tracks. “Brother Sun” shows a heavier side, deeply psych, trippy and low-fi, mind-melting, a trance-a-delic tribal tune indicating some exceptional acidly drenched guitar outbursts! “Maiden” dives deeper inside your Mind, lost in the dark corridors of your Soul, weird with creepy vocals and whispering voices, it’s like ‘acid’ floods your innervision, an extremely psychic tune, intensely influenced by the most weird psychedelic side of Pink Floyd! “Earth, Moon And The Sun” is based on some improvisational acid guitar licks while the mood of a spacey experimentation creates a unique spaced-out atmos! “Sister Moon” has a kind of spacey bucolic environment and “acts” like the opposite of the song “Brother Sun”, less heavy, with trippy vocals and a hypnotic dreamy melody, but somehow manages to stay inside this tremendous unique Psych Vein that Psychedelic Sun’s has created! The Album closes with the psych-windy “Away”, an eastern-like influenced tune, atmospherically psych with an Acid Haze filling the air, the more you breathe the more you elevate! In conclusion… This is One of the Best Albums of 2018 and I will pray for a vinyl release someday! (TimeLord Michalis)

Listen / But at Psychedelic Sun’s Bandcamp: