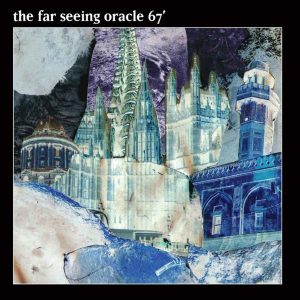 The F.S.O. (Far Seeing Oracle) is a kosmische-tinged band, hailing from Boston, Massachusetts. Main members are Jorge Benitez (organ, piano, harmonium, dulcimer, synthesizer & percussion), Angel Carrasquillo (bass, tape loops & percussion) and Ian Vidal (drums, percussion, synthesizers, guitar, tape loops & vocals), but in this “compilation CD” two other guys are participating, Ramon Ponce (guitar & loops) and Daniel Sierra (drums and percussion on 2 tracks). So, under the title of “The Far Seeing Oracle 67″, Clostridium Records released this summer (2018) a compilation of tracks from band’s first two records “Geist” and “The Häxan Tape”, initially digital released through their Bandcamp site, available for the first time in CD format. The first 3 tracks are taken from “Geist” while the next 4 are from “The Häxan Tape”. “Wholetone Hindustani Om” (6:21) opens the album, with an intro based on the electric guitar and a tremendous ‘drumming’ that makes the track a modern space-rock instrumental full of cosmic energy and a little kraut-flirting, it reminds me of the hallucinogenic and druggy drumbeat of the supreme “Tomorrow Never Knows”. “Loop’D” (10:19) is a spacey modernized version of Neu! (“Hallogallo” era), electronically flavored with a pinch of kosmische psychness, a real adventurous track. “Frigg’s Day” (16:48) is strongly influenced by the 67’-68’ Floyd era (especially “Saucerful Of Secrets”), it starts in a trippy n’ creepy way soon to be transformed into an ambient industrialized-like atmospheric field capable of starting the engines and set the listener in orbit to the moon along with the infinite pure darkness! The album closes with “Haxan Tape Parts II-V” (28:49), the sound of the guitar is more mellow, drums and bass are sounding more sweet to the ears, so the scenery has changed, we moved into 70’-71’, but still inside a Pink Floyd cocoon, patiently waiting for “Metamorphosis”. Eventually, the awaited transformation happens… A Space n’ Kraut idiom emerges out of the ‘damaged’ cocoon, bringing the listener into a simultaneous ecstasy with the band, entering the Vastness that our Kosmique Universe willingly offers… A Mind-Expanding Experience… SUPERB! (TimeLord Michalis)

Get in touch with the Band via their Facebook page: