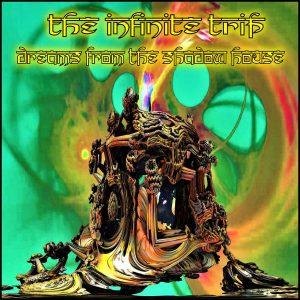 This is the 9th Infinite Trip studio album and the 3rd in 2018 (having released “TRIPS Volume 1” (Check Review) in January 2018 and “Illustrated Mind” in August 2018)! The Infinite Trip is a UK (Norwich) based studio project comprising of 2 veteran musicians who both have many years of experience. On “Dreams From The Shadow House” the band explains: “As ever we continue to push the boundaries of the psychedelic rock genre, incorporating many different and diverse musical elements into the mix. This album is all about the hidden aspects of ourselves that we repress or are unaware of – the unconscious shadow, the “other”. The Shadow House is where we store or bury all of our fears and unrealized potentials, the things that we wish to stay hidden from the light”…

The Album consists of 9 original compositions, from 7 to 9 min long each one, space rock oriented and the band (through their Bandcamp page) gives us a little info about the tracks, helping to understand many things and feel their music from a different listening angle! The album takes off with “Always There (The Other One)” with a steady strong and trippy drumbeat, spacey-influenced vocals, a whispering droning space-rock tune… “So we hit the theme running on this track. Everything is slightly mutated – the voice is reduced to a whisper, the keyboards wobble, even the drone, the fixed tonal foundation of the track, ebbs, and swells, expressing instability. The Other One, whether internal or a stranger, is fascinating, dangerous – and mutable”… The New Aged Space-Rock “The Universe Provides” follows… “whatever we need psychologically, whether desired or not, is played back to us if we are awake enough. Built around a simple riff, the song has prog rock overtones and is augmented with mellotron strings and flutes, a plaintive wailing keyboard sound and a dark, robust guitar solo that builds from chords to long trills”… “Alien Shaman (Hello Hello)” is a tribal space-rock with a Floydish ambiance all over… “Alien Shaman – Shamans are healers, astral travelers, dissolvers of boundaries. Imagine how strange an alien shaman would appear! This is a haunting and unearthly track, lots of space ambiance, lovely echoing guitar scrapes and twangs and ethnic percussion. We thought we’d take the Umma Gumma vibe and color outside the lines. Only after we’d finished recording did we realize it was well over nine minutes long. Nice!”… The space-rock scenery becomes spiritualistic and dreamy on “Neptune Rises Out of Scorpio”… “Like a refreshing shower of rain or sea spray, the wash of chorused guitars soothe the spirit. The mood is further enhanced by a beautiful chiming electric piano solo. Astrologically speaking, Neptune rising from Scorpio gives us the chance to encounter and relate to unconscious energies. We embrace the unknown and transcend barriers. Another long and dreamlike track with echoes of nursery rhymes and folk tales”… “Starry Sea Of Possibilities” is a harsh space pounder that welcomes Hawkwind to the New Age of Space Rock while the haunted demonic riff of “Set The Controls For The Heart…” enters your mind and causes total liquefaction of your brain cells… “Relentless pounding drums, Reverse guitar solo, Undulating synth solos and Deeply echoed vocals. This is a song about the guiding lights that call to us from the darkness of inner and outer space. Created from Chaos with a sense of adventure this song became part of our journey. We don’t know where we’re going… But we’re going there!”… “In the Beginning was the Wyrd” is weird but fancied, trippy and extremely addictive… “Wyrd is the old Norse term for fate or destiny. Whatever imaginary worlds we may create or inhabit, we cannot escape the workings of fate. This may feel disastrous or come as a blessing, a relief. We stayed on more conventional musical terrain for this song but enjoyed very much the opportunity to dust off the classic Hammond organ and let it battle the searing guitars. Don’t ask us how we got that strange “cats in space” sound at the beginning and end of the track – we can’t remember!”… Another new-age-space-rock tune and a little acidly drenched is “She holds the Lantern Dim”… “Crashing echoed piano and a dark ambiance herald this neo-gothic saga with busy drums, watery guitar and some sombre electronic cellos in the middle section. We go looking for the light in the strangest of places…And sometimes we find it. Even the angels may envy the freedom of the ordinary human being sometimes. The long fade at the end of the song is very evocative and melancholy”… “Thief Of Time” transports you in that particular place in the middle of a spacey crossroad where the 4 roads/paths are joining, Pink Floyd, Hawkwind, Ash Ra Tempel, and Gong!… “This was always going to be a two-parter with an ambient interlude holding the two halves together. The first part is quiet and plaintive, tacked onto a simple minor riff. It asks what happened to the time, to all of our moments and opportunities, and questions who stole them? The spacey middle part represents the void, a timeless realm of the unconscious, without rhythm, without sequence. We used ambient guitar with lots of special reverb, a muted floydlike keyboard, and some gongs to create a dreamy feel. The meditative mood is rudely broken by the aggressive voice of the hidden other, the unlived part of us that we repress. This section is the answer to the question of who stole Time. We love the playful lyrics, the punky funk feel and the biting wah wah guitar. We had a lot of fun rocking out on this one”… The album closes with the hard n’ sharp ethnic-flirting spacey rocker “Flashback”… “This kicks off with ethnic percussion, throat singing and some stirring oriental strings before crashing into a fierce refrain, “There is something really wrong with me”. Lyrically the song is about karmic sequences, repetitions of experience and behavior. A brand new Stratocaster added some bite to the rhythm and solos. The album started with a whisper and ends with a bang. Enjoy!”… The band states: “Nine is the number of fulfillment, completion and new beginnings. We are already planning fresh sonic adventures. Stay tuned and thank you. We hope you enjoyed the Trip” and I’ll be pretty much anticipating their next ‘step”. In conclusion, “Dreams From The Shadow House” is an exciting, thrilling and mind-expanding Trip that I would like to do it again and again and again… Addictive! (TimeLord Michalis)

Check, Listen & Buy through their Bandcamp: