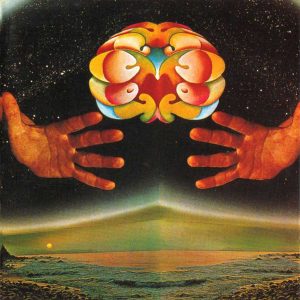 So, when I was about to buy a reissue copy of 1969’s “Touch” LP by Touch, the record-shop owner (journalist/guru of psychedelia/Master-knowledge in Underground Hard/Prog Rock) Mr. Nikolas told me “of course you want to but this one! This is probably the only 60s American Progressive Rock LP!” Undoubtedly the ‘content’ of Touch’s one and only album is Marvelous! Early Prog-Rock – remember it was still 1969 and it was made in the US!!! – at its Best! Fast forward to 2018… FdM Records’ One-Man Mr. Keith Jones is putting out a 7inch vinyl single featuring tracks from the “Touch” LP! Keith explains: “Fruits de Mer Records’ first reissue single and, as it’s 10 years since we launched with the intention of being a 7″ reissue, it has to be a good one. If you happen to have read Dave Thompson’s book, “The Incomplete Angler”, you might recall that the 1969 LP on Deram by Touch meant a helluva lot to me as a kid – to the extent that I laboriously drew the band logo all over my school books and put their (slightly doubtful) poster on my bedroom wall. The album is/was a wild, unique mix of US psych-meets-prog – over-the-top vocals, swirling keyboards, searing guitar, crazed studio effects; it’s said that Jimi Hendrix called in on the studio sessions and was suitably impressed. So when Cherry Red Records gave me the chance to put out a single featuring tracks from their one and only album, there wasn’t a moment’s hesitation….OH YES! Amazing music and a bit of a dream come true, but the single had to have an extra something – and that’s a track called “We Finally Met Today”, recorded for a 1968 single that never materialized and (as far as I know) has never been released on vinyl until now. Add in a mini fold-out poster that replicates the one that was included with the original LP and FdM finally becomes the reissue label that Andy and I set out to be in the first place”…

My favorite track from that 1969 LP is “Seventy-Five” but how can you fit 11 minutes on a 7inch single? Hehehe… Anyway, the Single features “We Feel Fine” (opening track of the original LP that also released as B-side of “Miss Teach” in 1969 by Deram) and “Down At Circe’s Place” (opening track of B-side of the “Touch” LP). The third “Touch” song that completes this release is called “We Finally Met Today”, recorded for a 1968 single that never released, featured as bonus track a few years ago on a CD re-release of the “Touch” album and first time ever on wax! A soulful jazzy psych-rock song with pinches of progressive and some hot fuzzy guitar sounding! I’m pretty sure that after buying this splendid killer 7 incher your next move will be to buy that 1969 LP album, if you already haven’t got it! TOP-CLASS 7inch Re-issue of the year! … and very progressively TOUCHing!!! (TimeLord Michalis)

Buy it directly from FdM Records:

Alternatively get it from Heyday Mail order (UK):