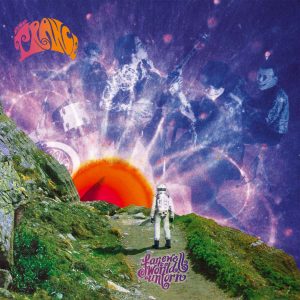 In the 80s, the Best Kept Secret of Vienna, was The Vogue… But in the 90s, undoubtedly the prize goes to The Trance! German label Time For Action at times is “acting” like a great “gravedigger”… You know what I mean, right? Well the press release sheet reads: “THE TRANCE appears to be one of the best kept secret from Vienna, Austria. Splendid Freakbeat combined with groovy 60´s Hammond club sound and Mod-Pop-Psych with sharp and twangy guitar riffs. Nurturing youthful psychedelic dreams on Vienna´s cobblestone streets, The Trance founded in fall 1995. Featuring Norb Payr (THE SUBCANDIES, THE JAYBIRDS) on guitar and vocals, bass and vocals by Ted Snydal, and Snarf Hoover on organ, three former members of early 90´s down-and-dirty rockers THE ROAD, the group was swiftly joined by Erich Mader on drums. Later replaced by Mike Kratochwil. They released a CD only album in 1997 and played the 90´s Vienna circuit: Chelsea, Fley, Brix & Unplugged, were regulars at the Taverna´s sleepover hippiefests and toured as far south as Carinthia. But despite their modest dreams of world domination, the Trance broke up in late 1998. Here we go now with a super limited vinyl pressing of 200 copies only… featuring all 9 songs from the CD, three bonus tracks, fully remastered, and a posh inlay sheet. Get it before it is a secret again!!!”

The original 1997 CD release was called “Play Organ And Pop Sounds” but now the title was changed to “Farewell To A World Untorn”. Side ‘A’ kicks off with “Officer Pearson”, a groovy organ-driven song with a real cool danceable rhythm, telling the story of Officer Pearson who was sent on a mission to the center of the Galaxy and explore but unfortunately something changed during that time… (I’m sorry, you need to but the album to see how this surprising story ends, you will also be completely satisfied by the music that is performed here!!!) Anyway… Another organ drenched tune follows, the up-tempo “Magic Sphere”, with adventurous guitar work and an emerging psych-a-like poppy feeling and an intense ‘flirt’ with late 60s British Psychedelia towards its end. “Palace Of My Dreams” is full of poppy melodies, a dominant organ sound and a few female backing vocals. “Cloud Nine” is not only inspired by the Sixties but also relegates to that lovely British-Psych era! “Femme Fatale” is a pop-rock tune with a sharp guitar sound and the ‘familiar’ by now characteristic band’s organ sound that becomes heavy at times. Side ‘B’ opens with “Why Me”, the poppy organ sound is diffusible while the track dives into the sunniest side of the US 60s West Coast! The semi-acoustic semi-electric “The Ride” is a rhythmic tune with some wonderful vocal harmonies sending us back to the Great L.A. bands of the late 60s. “Falling For You” is a hot tune full of dynamite waiting to be exploded while “Trance” is a garage-pop tune, danceable enough, with a groovy guitar solo, a track that reminds me the All-Time-Garage anthem “Steppin’ Stone”. “Running Away” is a garage-stomper with a strong beat fueled with maximum organ sound! (it’s a previously unreleased song, resurrected and remastered from 4-track multi-tracker recordings destined for a long-lost 1996 cassette-single!) “Magic Sphere (4-track)” is more guitar based and less organ oriented and I’ll have to admit that I prefer the most powerful version from the first side. The album closes with an instrumental version of “Officer Pearson (Reprise)”. So, it’s Time For Action! Grab this piece of wax before it disappears from the face of earth! From now on, The Trance will no longer be a Secret! You have been warned! Right? (TimeLord Michalis)

Get it directly from Time For Action Records: