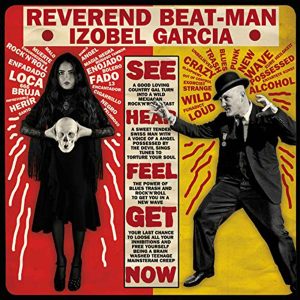 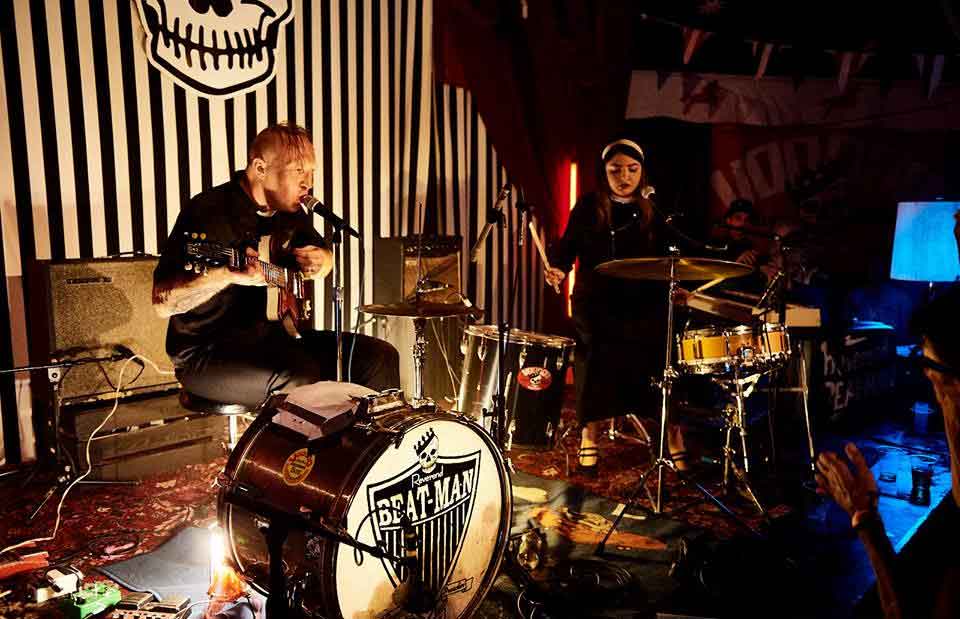 The press release reads: “REVEREND BEAT-MAN TEAMS UP WITH LA/MEXICAN FAME MYSTERIA ‘N VOICE OF THE CENTURY IZOBEL GARCIA AND GIVES YOU THE FULL BLAST IN BLUES TRASH AND FOLK NOIR INCL OBNOXIOUS COVER VERSIONS OF: VENOM, THE DOORS & CHAVELA VARGAS… All of this was recorded either in Italy, Switzerland, or Los Angeles… have fun with BAILE (dance) BRUJA (witch) MUERTO (death) this Album is Full of GARAGE and Weird ROCK’N’ROLL and CUMBIA…”

The Reverend Beat-Man and Nicole Izobel Garcia first met up in Los Angeles at a show. He called her to play drums and organ at Alex’s Bar in Long Beach, the two of them connected and a couple months later they toured Europe. So the natural consequence was a collaboration between both of them resulting an album with original songs and a few covers too.

The album takes off with “Pero Te Amo (But I Love You)”, it starts softly like an acoustic Spanish ballad with Izobel’s serene and beautifully trippy vocals creating a peaceful atmos, soon to be rudely interrupted by Mr. Reverend’s characteristic priestly brutal voice! Of course the music changes also! Heavy beats, fuzzy guitars and a duo ready to transform/transport us (you decide what you want to happen to you!) “Come Back Lord” is a wild n’ screamy organ driven tune, fast and danceable enough with a fuzzy n’ groovy daemonic rhythm, showing Reverend’s voice in a great shape while his usual dirty vocals are included here too! The atmosphere on “I Never Told You” becomes dirtier, fuzzier, noisier, the killer fuzzy guitar licks are dressing Izobel’s voice leading in the craziest roaring swing-a-delic Rock N’ Roll nightmare you will ever dream (the tune is also offered for merciless ruthless headbanging!!!) With “Black Metal”, Reverend honors his ‘musical mentors’ by making a tremendously thrashy n’ bluesy cover of Venom’s song creating a revolutionary and subversive voodoo-ish version! “Viva La Figa” is a short (0:58 sec) funny kind of childish swing-a-roller celebrating… ‘women’… On “Lass Uns Liebe Machen (Haremos El Amor)” Reverend asks “Let’s Make Love” (Lass Uns Liebe Machen in German) and Izobel answers “We Will Make Love” (Haremos El Amor in Spanish), a strange electro acoustic duet – sung in German and Spanish – simple touchable and thrifty with a feeling of nostalgia and a great rhythm too! Under a strange and kind of creepy atmosphere Izobel sings “Macorina”, a song originally by Chavela Vargas, a Mexican icon in traditional Folk Noir music (She was a strong fighter for women’s rights in Mexico and across the globe). Another surprising rebellious cover version follows with Doors’ “Love Me Two Times”, under a torturously slow tempo, the duo creates a totally swamp-a-like version taken straight out of a graveyard! “Nerviosa” is an electronic moody but rather trippy and monotone experiment, very sentimental and melodic built upon a synth & a drum-kit rumba beat! (or something like that…hehehe) By the very start of “I’ll Take Care Of You” with the hiss and vinyl crackling noise sound effects, we are automatically transported to a different era, back in the late 40s – early 50s, the age of Doo-Wop music, the crooners and all that Jazz (Dig it? Hehehehe…) A strange but lovely balladesque tune that somehow gives me a strong and intense feeling of a Wolfman Jack presence! The album closes with an interesting exciting and rather didactic/educative story sung by the Reverend on “My Name Reverend Beat-Man” (7:33min). Presented here not in the traditional singing way, it’s more like preaching, under various strange sounding effects and a repeated steady low guitar melody creating a rather mystical and psychedelic scenery. A social cry for where-the-hell-humanity-has-gone-to these days! A heavy bluesy n’ revealing tune of The Reverend’s Apocalypse! In conclusion, “Baile Bruja Muerto” is a Psychic, Garagey, Punky, Heavy, Swampy, Rhythm n’ Bluesy album destined to be C-U-L-T!!! (TimeLord Michalis) 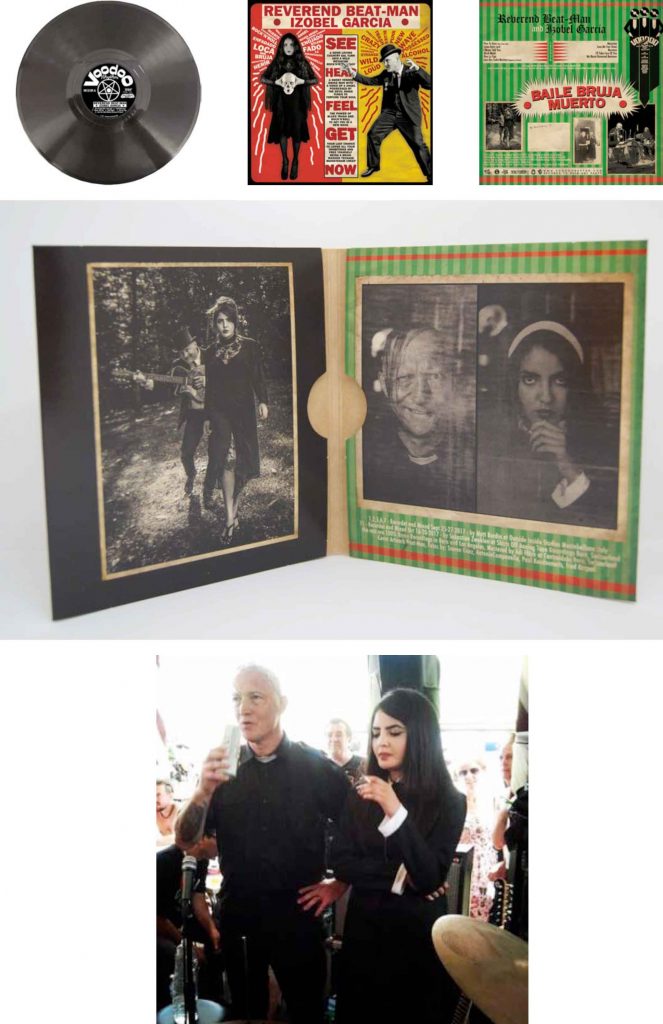 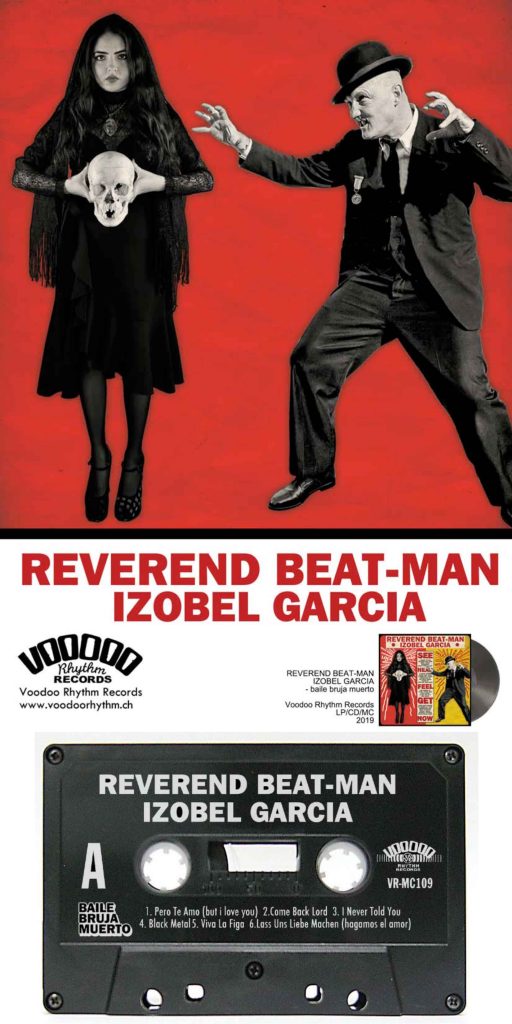