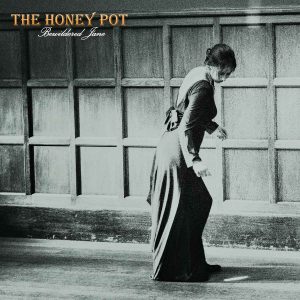 Here’s a little info about The Honey Pot (taken from Mega Dodo web):

“The Honey Pot formed as a five-piece band in 2012. Playing a blend of Sixties psyche that has its boots in the past but its head in the future, they draw on that unique English inheritance of the surreal and the strange, but are not afraid to indulge in an American West-Coast style adventure when the mood takes them. Purveying a warm brew of hazy recollections and black penny grooves they are thoroughly groovy.

Although thoroughly unique, The Honey Pot would probably admit the following influences, The Yardbirds, The Doors, The Small Faces, Jefferson Airplane, Donovan, The Kinks, The Flaming Groovies, Spirit, The Hollies, The Jeff Beck Group, Love, Kevin Ayers, The Rolling Stones… The band released its début album, “To The Edge Of The World” in 2013 and gigged regularly around their native West Country. On one of their many excursions into the deepest, darkest corners of Dartmoor, they misplaced singer Iain Crawford, who was later found in Copenhagen.

Unable to persuade him to return they soldiered on and contributed a track to the charity album “Home For Christmas”. Featuring their bassist on vocals, it marked another turning point in the band’s career as he too decided to fly the nest. In early 2015 the band recruited a new bassist and keyboard player. They played a storming set at the Games For May all-dayer at the Half Moon, Putney, and finished work on a new single and album called “Inside The Whale” that was released in early 2016. Since then there have been further changes to the lineup. A new bassist, Andy Budge, joined in early 2018 along with drummer Jay Robertson. The Honey Pot have been kept busy as bees recording a new studio album that will be released by Mega Dodo in March 2019.”

“Those psychedelic darlings of the A303, The Honey Pot, power into 2019 with their first album of all new material since 2016’s Inside The Whale. Bewildered Jane is their fourth long-player, fifth if you include their recent compilation of rarities and their third for Mega Dodo. Confused? Or should that be bewildered? Produced by founding member Icarus Peel, Bewildered Jane sees The Honey Pot sound maturing. It’s richer and deeper, the harmonies lusher and the sound that little bit fuller. It’s as if the band has made a collective decision to ditch milk chocolate for a 100% cocoa dark variety. Bewildered Jane may be a tad darker than their previous long-players, but its core remains resolutely familiar. Bewildered Jane is released on 29th March 2019 as a limited edition 180 gram black and white vinyl LP in a gatefold sleeve (300 copies only). In addition, the first 99 copies bought through the Mega Dodo website come with a handwritten lyric sheet and live CD recorded at the Onboard The Craft festival. The CD features a bonus track, ‘Dust Drawn Maps’, and is released in a 6-panel lancing pack. The download will be available as a series of 0s and 1s from your favourite digital retailer.”

“Bewildered Jane” contains 10 original compositions by the Harmony Ambassadors The Honey Pot. Captain Icarus Peel along with Mermaid Crystal Jacqueline and their crew are taking us into a promising journey, a flashback trip to the kaleidoscopic yesteryears. The album takes off with “Hadron Kaleidoscope”, it starts with a spacey new age intro soon to become a rhythmic modern psychedelic-rock tune while a lot of interesting “things” happening at the background. Sung by Crystal and dominated by the powerful Icarus’ Acid guitar licks (courtesy of Icarus Peel’s Acid Reign) the song introduces a polyphonic swirling sound that surrounds your brain and conquers it immediately! Towards the end that wonderful guitar sound is dangerously flirting with some exciting Eastern scales. Icarus is singing the main vocals on “A Simple Act”, a song that moves into the familiar by now Pop-Psych Honey Pot motive, also here at the background, there’s a rather complex and interesting instrumentation, indicating a gentle psychedelic section in the middle, capable to melt your brains! Crystal sings the acoustically sounding ballad “Await You Here”, the song starts with some peaceful early morning sounds and birds singing, under a psychedelically soft and smooth veil, the piano adds a kind of nostalgic feeling to this relaxing tune while for the last 2 minutes the song is flavored with some late 60s Brit Psychedelia. “Light Splinters” is a beautiful ‘La La La’ song sung by Crystal with a pop-sike-folkie tint and a little bit Eastern inspired. “Dust Drawn Maps” is a slow number, dressed in melancholy with Crystal’s sweet voice, a dreamy ballad emerging a strong nostalgic feeling with an excellent ‘psychic’ instrumentation. The next one, “Harmony Ambassador” is sung by both Icarus and Crystal, a song capable enough to baptize The Honey Pot as one of England’s Greatest Pop-Sike melody makers! “Time And Tide” is a balledesque tune sung by Icarus under an acoustic guitar background. Crystal sings another lovely ballad, “The Partisan Returns” under a smooth folkie musical landscape. The last song of the album “Waving Good-bye” is sung by both, a poppy tune starting with sounds from a boat in the sea, a happy song with a tremendous mind-blowing wah-wah guitar sounding in the middle section… So in conclusion, “Bewildered Jane” is a Pot full of psychedelically flavored melodies and once you put your finger inside and taste the Honey, then you’ll find yourself lusting for more and more! (TimeLord Michalis)

Get the Album through Mega Dodo Records: