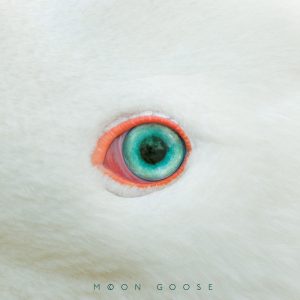 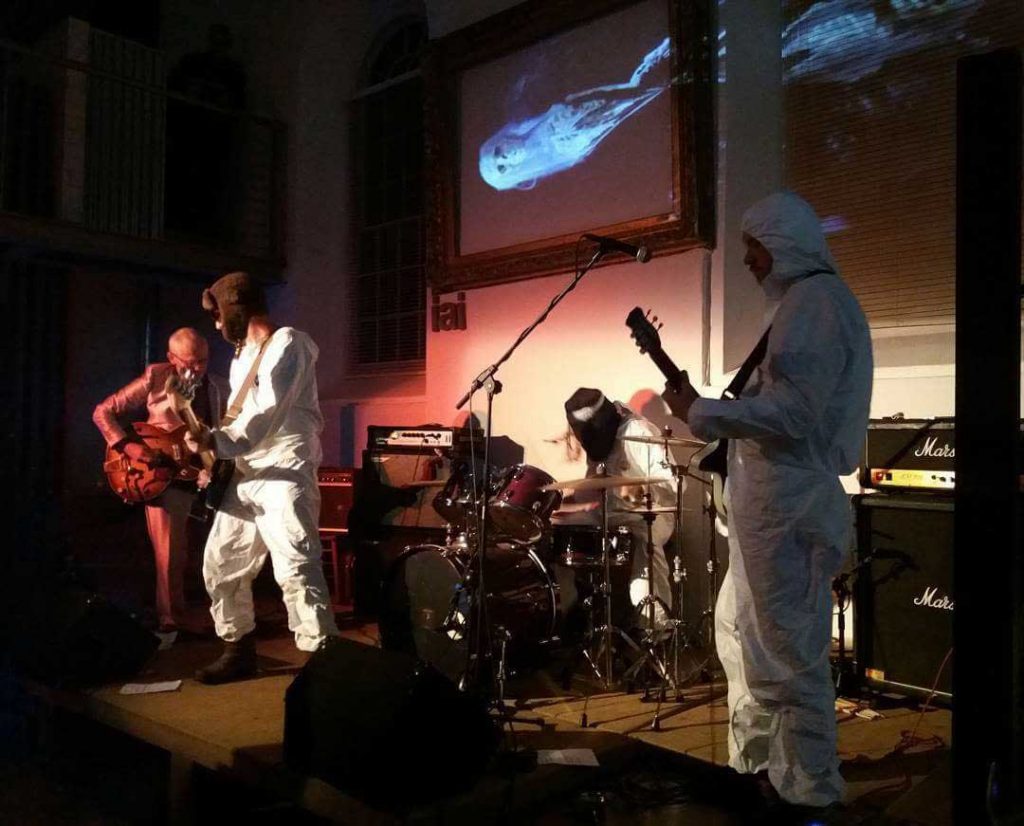 I do not know how many of you out there are familiar with the Strange Fish Series by Fruits de Mer Records label. Craig Padilla, Sendelica, Michael Padilla, Arcade Messiah, Kris Gietkowski, Moonweevil are some of the bands/artists that have released their stuff under the ‘Strange Fish’ moniker, since 2013. So, the Strange Fish Sixteen is a double vinyl scheduled for release late April 2019, by a ‘weird’ UK band called Moon Goose!

Keith (FdM Records) explains: “Moon Goose play driving, guitar-led instrumental rock – they first came to my, and possibly your, attention last year when I found them on Facebook, liked what I heard and persuaded them to give me a track to include on a members club compilation CD. Feedback was really good, not least from Heyday Mail Order’s Nick Leese (whose taste in music is both discerning and impeccable!), and they kindly provided a free CD sampler to go in the 16th Dream Of Dr. Sardonicus festival goodie-bag. We carried on talking and now the band has chosen Fruits de Mer for their first album release – and it’s a storming set. They might be new to vinyl, but they have a great judge of pace across a side of an LP, ringing the changes often enough never to lose your interest, building to a crescendo on side four that leaves you begging for more…”
The double LP album is called “Source Code” and the release includes a CD of the album also. 12 songs/compositions that spread out in 4 sides of the vinyl. “Second Life” starts and you get the feeling of an alarm clock that wakes you up landing you back to reality. Sharp Hawkwind-like space rock becoming fast and quite heavy shamelessly flirting with Neu’s “Hallogallo”. “Knifeless Skinning” is a slower number, heavy space rock, still instrumental but with a lot of acid-rock influences and a kind of industrialized atmos. “Le Conte” with its tribal drumming starts under a groovy rhythm and some exceptional pure electric guitar sounding, becoming heavy but also melodic at times. One of the good things with instrumental pieces of music is that you can name them however you like! “The Mysterious Coffins Of Arthur’s Seat” follows, it’s a trippy cool tune with a hallucinogenic mind-melting atmosphere, a really addictive piece! “Goldfish In A Bag” has heavy guitar riffing and powerful drumming under a crazy driven organ rhythm. “Trains” has ambient-like synth keys, becoming an adventurous mind blowing instro flirting with prog and space becoming psychedelically bluesy, experimenting with ‘synth futuristic sounds’ transforming into a speedy uncontrolled furious rollercoaster loaded with TNT! Another futuristic sci-fi spacey tune is the next one, “Joey Gets A Candle (Swayze Meld)”, heavy guitars under an electronically proggy environment with a cinematic approach! “Carnage” is a brilliant example of some British Heavy Neo-Space Rock! “Dark Shit” it’s trippy space rock with a Spanish voice intro, improvised experimental with a unique rough edgy musical pattern! The scenery remains trippy on “Garway Witch Trial”, a little more darker, still experimental, more proggy with a futuristic and kind of ‘tricky’ sounding! On “Parameter 5” with have some Heavy Sharp Spacey Psych Rock. The album closes with “Fist Fight At The Bingo”, acidly drenched space-rock under a surf-mentalist background in a surf n’ roll grungy style that slowly becomes a distorted but dreamy new-age spacey tune! So, if you’re into some weird sonic space-rock soundscapes then all you have to do is to follow Moon Goose on their Source Code lunar adventure! Genius! (TimeLord Michalis) 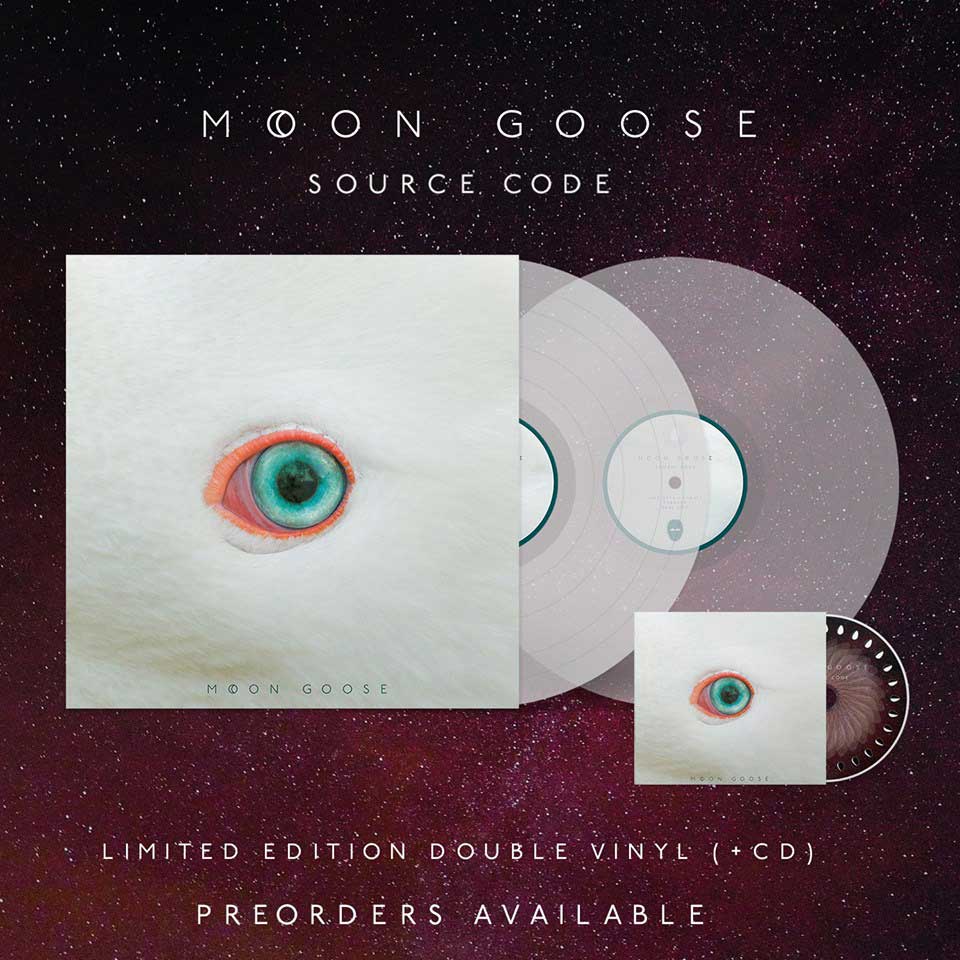 Keith Jones asked the band a few things about Moon Goose. The answers are below and if you find yourself more confused than before then listen to the album, all of your queries will be automatically answered!

What are the origins of Moon Goose?
‘Moon Goose’ refers to the upper level of a hay barn in west Herefordshire which emits music across the old borderlands each week, usually on a Thursday evening. Its origins can be found, using the correct equipment, from sources such as the Rapa Nui stone heads, and dragons. The music of Moon Goose was referred to by Stuart Maconie on BBC 6Music’s Freak Zone as ‘Cambrian psychedelia’, a reasonable description due to the happy combination of geology and consciousness. There is plenty of Devonian old red sandstone in the music. There is also, if you know where to find it, gneiss. Well, the essence of these archaic sources is channelled – by the shiplike oaken timbers of the barn, and by the many hundreds of records that line its walls, and by the casual piles of vintage music technology that line the floor – through the bodies of the five human musical operators who represent Moon Goose in this dimension, and into strange sonic shapes.
What are your influences?
Musical influences include, for example, Tibetan chanting monks, Can, and Bronski Beat. Beyond that, it is fair to say that the entire universe influences Moon Goose in one way or another. And in a strange additional twist, Moon Goose is partly influenced by events that have not yet happened. It can thus be seen as music for the Ecozoic era.
What are the band’s plans for 2019?
Most things happen without a huge amount of forward planning, when it comes to the Goose, so it’s hard to say what the year has in store. Some gigs are confirmed in a range of locations including Cardiff, a field somewhere in mid-Wales, and Cardigan. Other gigs are under discussion for Nottingham; Oxford; and New Radnor. Moon Goose has also started work on a second album, which ideally would be released before the first one, but that appears unlikely.
What can you tell us about ‘Source Code’?
Although concept albums were declared extinct some time during 1977, the source code that gave the album its title literally floated across from the Great Pyramids of Giza one hot afternoon in late 2018. That Cairo day, 20% of the band was slumped, exhausted, in the garden of the Marriott Hotel that overlooks those fine alien structures. At some point during that jetlagged and disembodied afternoon, with the security situation looking tense, the four lines of source code found themselves being written down. The source code has been translated into a representative sample of the world’s 7000 or so languages but Moon Goose very much welcomes further interpretations, preferably in the world’s most endangered tongues. Please send them by post, care of Keith at Fruits de Mer. The source code can be used, among other things, as lyrics for the twelve instrumental tracks that populate the vinyl, one line of code per side of vinyl, just add your own melodies. The source code also helped to uncover a poem by Charles Causley, called ‘I am the song’, in whose beauty and back-to-frontness the flapping spirit of the Goose can clearly be found. Incidentally, although no birds were deliberately harmed during the making of Source Code, Moon Goose would like to extend its sorrowful respects to the mother goose who was fatally driven over by one of the guitar operators, shortly after the album was sent off for vinyl mastering. Don’t worry, mother, you did not die in vain!

Listen or Get it through Moon Goose’s Bandcamp: