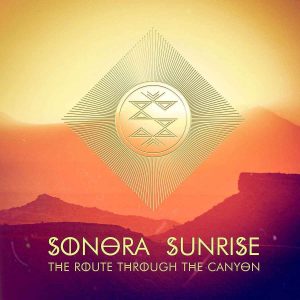 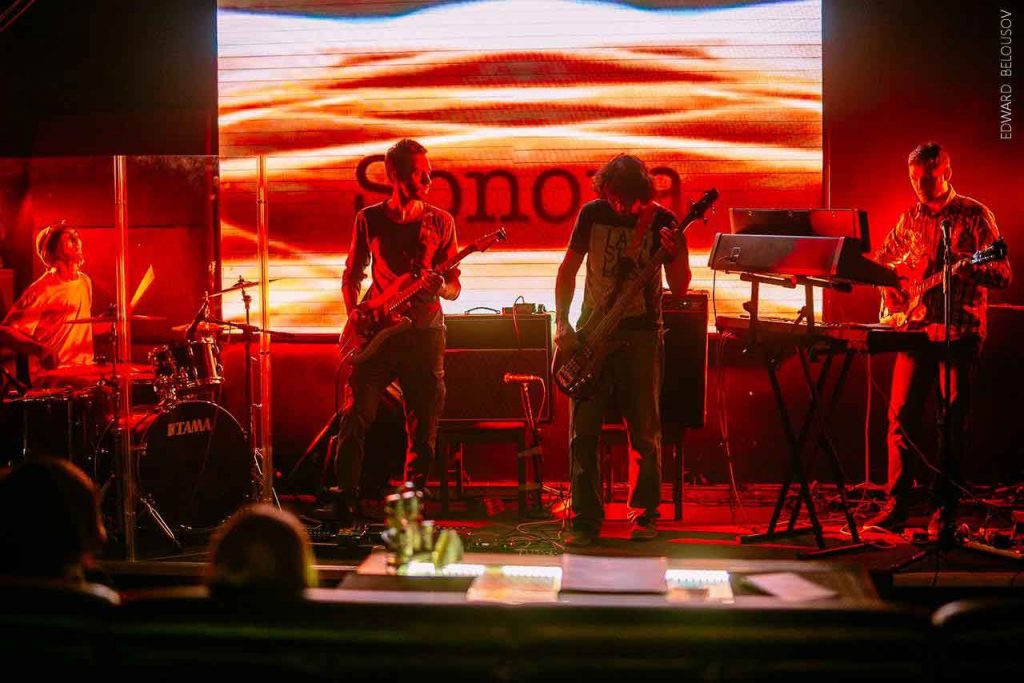 Trail Records is an independent record label from New York established back in 2007 and since then Alexander Tsalikhin (one of the two bosses) keeps on feeding the world with some high-class Psychedelic World Music. Let me give you some of the names so you can see what all is about! Bands/artists names that have released albums through Trail Records include The Spacious Mind (Sweden), In The Labyrinth (Sweden), Polska Radio One (Russia), Beyond-O-Matic (USA), Barrett Elmore (Sweden), Sky Cries Mary (USA), Siddhartha (Turkey), Zhaoze (China) and many more. This time Trail Records present us Sonora Sunrise, a band hailing from Altai, Russia. The band consists of: Alexey Shulepov (Bass Guitar), Vitaliy Khard (Drums), Artem Demidov (Guitar, Sounds,Soundscapes) and Dmitry Shershnev (Keyboards, Guitar).

On their Bandcamp site you can read: “Sonora Sunrise is a Russian band from Altai. Altai is a sacred land of ancient mountains that are still keeping secrets and old shamanic rites. The culture and wild nature of this land inspires the musicians. Sonora Sunrise music is transparent and light, like the wind blowing from the mountains. Sometimes it is merciless, like a storm in the desert. The album is imbued with mysticism and the atmosphere of the Altai desert, mountains and shamanism. The album contains 9 tracks in various styles: psychedelic rock, krautrock, space rock, stoner rock and ambient. The band has managed to develop its own authentic and recognizable sound. When recording the album, the musicians used rare analogue synthesizers of the Soviet era. From the first seconds, this music immerses the listeners into a unique atmosphere, a world created by the musicians. All tracks on the album were recorded in just two days with all the members participating as during rehearsals. Later the musicians added some more guitar, synthesizers, and the vocals. This is why the recording sounds live – a large part of it are improvisation and the flight of imagination. Turn on this record, relax in a comfortable armchair, and start your mystic trip through a canyon, to a place at the edge of the desert where a sunrise will meet you…”

Under an ambient creepy-like sounding environment, “Ancient Stones (Sundown)” starts the album, with a female singer calling/warning or maybe welcoming the listener to the magical place of Altai. “Welcome To The Sandland” has a spiritually peaceful beginning while progressively becoming a wondrous adventurous musical space-rock trip full of dark mystagogy ending under a plethora of Shamanic vibes! On “Unexpected Trip” the music becomes more progressive rock oriented, still mystical, of course instrumental, transcending the listener into a dreamy state of mind. “Poison” with its haunted trippy keys and the poisonous 70s proggy guitars, becomes atmospherically jazzy but still makes you think that you’re into some abandoned deserted place at the edge of the world. Mixed with “Poison” is the weird kind of interlude (55sec) “Ancient Stones (Uprise Of Jupiter)” while some trippy eerie sounds enter you in the next track “Canyon”, it could be a musical theme from a Western B movie but hell no! Sooner the track is transformed into an extremely trippy improvised and experimentally jazzy tune, leading you to discover some unknown ‘corridors’ of your mind! “Millions Of Snakes” starts… Light a cigarette, have a hit of fresh air, the wind blows… and the snake is long… Seven Thousand Miles… A heavy musical landscape based on hot guitar sounding, this is New-Age Progressive Rock with a trippy Atmos! “Roadside Picnic” is a more ‘lay-back’ relaxing tune built on some trippy guitar melodies while the album eventually ends with “Ancient Stones (Planetary Standoff)”, it acts like an outro, a scary one, but with a rather progressive and space-rock sounding!

In conclusion, I really enjoyed this 50 min long route through the Canyon… you may lost your mind but you can never lost yourself, so ride the Snake to the Lake… Sonora Sunrise are waiting at the other side of the lake… (TimeLord Michalis) 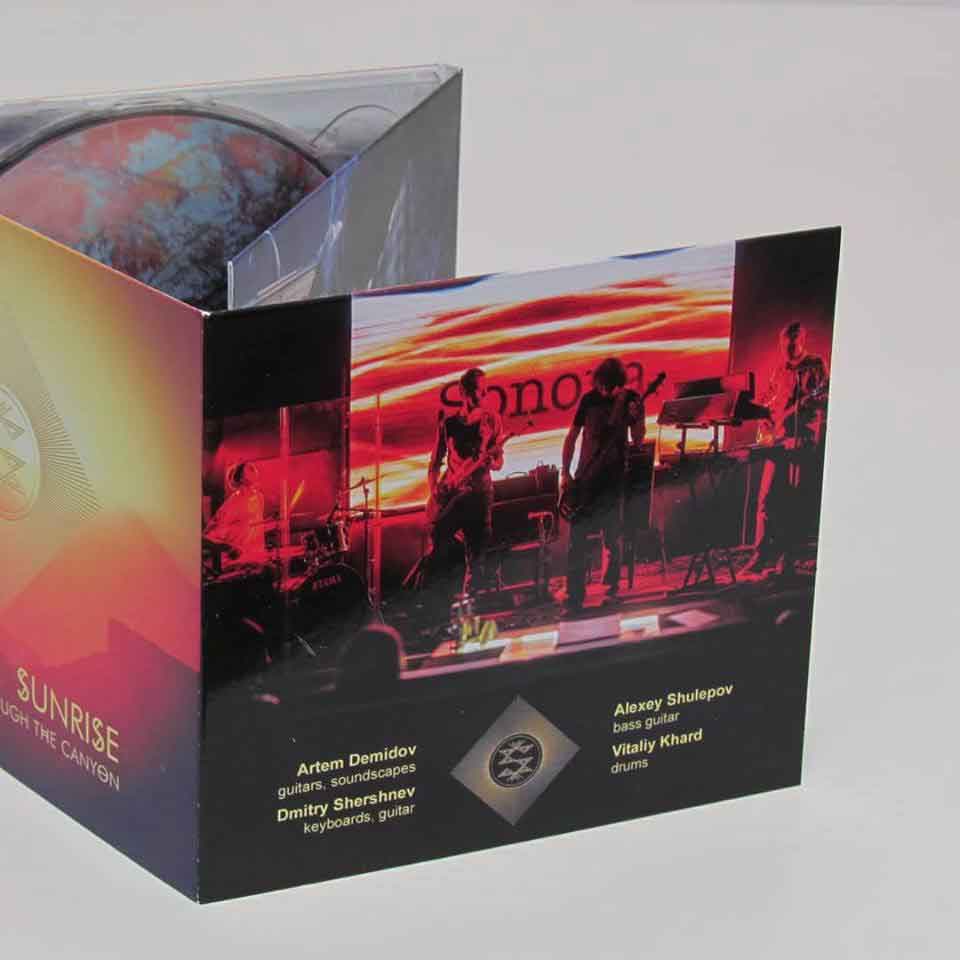 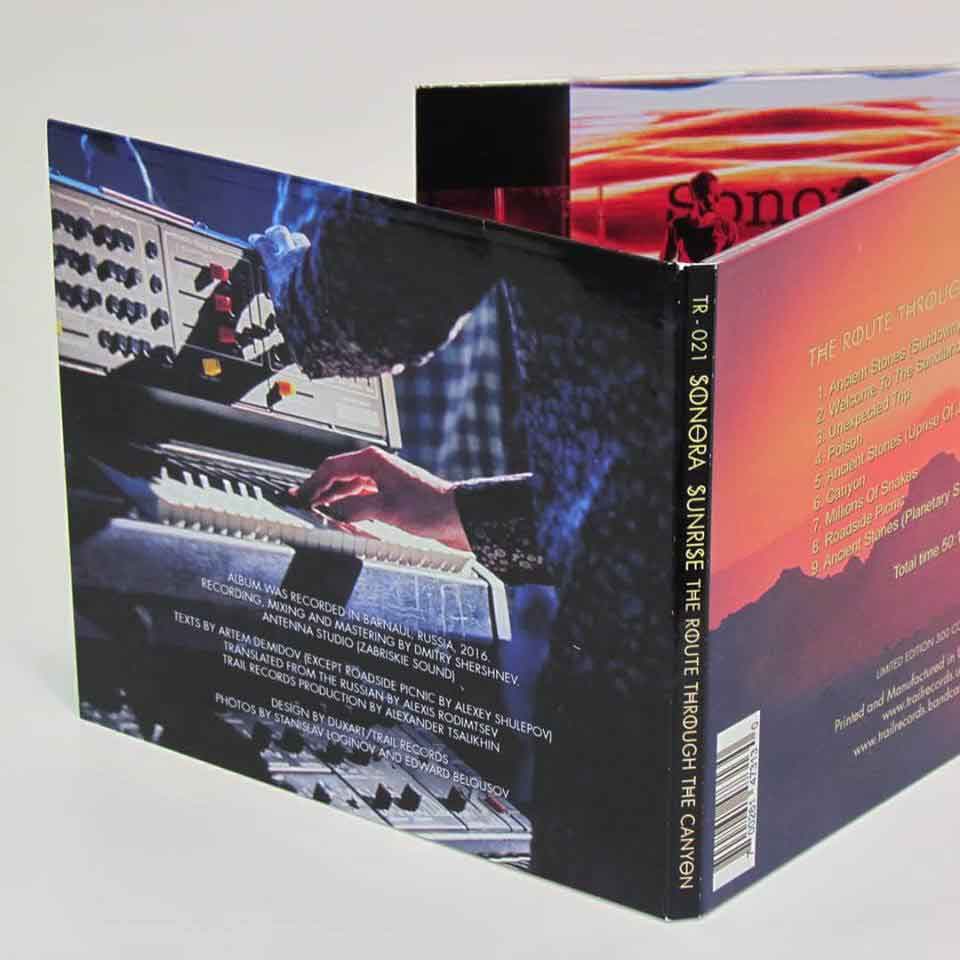