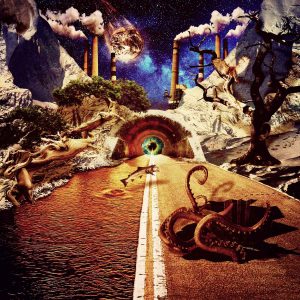 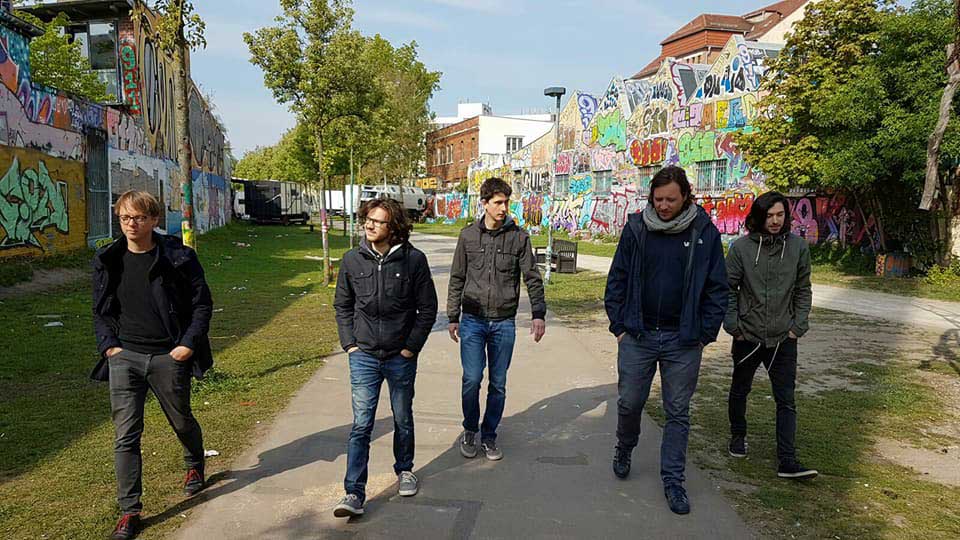 No Man’s Valley is a five-piece band from the south of the Netherlands who have been jamming together for over 5 years now. So far, they have released 2 mini albums on CD (“Mirror Image” 2012 and “And Four Other Songs” 2014 both on Chrononaut Records) and of course their remarkable and astonishing “Time Travel” (2016) on LP/CD through Nasoni Records. “Outside The Dream” is their second full length album launching their collaboration with the German label Tonzonen.

The Press release reads: “On “Outside The Dream” the listener enters a country of musical shapeshifters. A vast wasteland of the mind and soul. Its soundtrack is simultaneously psychedelic, dark, melancholic, psychotic, powerful yet gentle. “Outside The Dream” is No Man’s Valley’s most personal work to date. The art and lyrical concept originate from a period of inner turmoil visualized in the tunnel on the outside and inside of the LP. The creation of the album proved to be a cathartic process, and it taught the band that music can truly be a healing power… However, “Outside The Dream” could not have been made by No Man’s Valley alone. The band acknowledges and cherishes all of the good people that made this release possible by donating and pre- ordering massively through the successful crowdfunding campaign. The record label Tonzonen Records has also played a vital role in its creation. The recording process of “Outside The Dream” was more compact than ever with the band spending only four days cramped together in a b&b-studio near Utrecht with producer/mixer Matthijs Kievit. Most of it was recorded live with the full band for that connected band-feel. All of the vocals were recorded separately in a menacing five hours at Studio Joneski in Hilversum. Pieter Kloos (Motorpsycho, Dool, 7Zuma7) took care of the mastering”.

The album consists of 8 original compositions (40:45 min in total) and it kicks off with the self titled “Outside The Dream”, torturous, slow-crawling with a heavy distinctive organ sound and some real agonizing vocals. “Eyeball” is a slow number with a syncopated rhythm under a dark psychic atmos with a muddy swampy bluesy feeling becoming a freaky circus-like (whatever that means!) tune towards its end! “Hawk Rock” is a fast song indicating and presenting an alternative Blues-Rock aspect of their music. “From Nowhere” has a mystical Madrugada-esque atmosphere under a psychic landscape emerging a strong Desert-Blues-Rock feeling. “Into The Blue” is another slow number, dipped into melancholy, a little bluesy flirting with some proggy keys and a dark but smooth psychotic feeling! The heavier “Blows” follows, with a brilliant haunted melody capable enough to blow your mind, flirting with the mid 70s Hard-Prog years and an astonishing psychedelically flavored middle section! The upbeat “Lies” is an alternatively psychic rockin’ bluesy tune with an intense Jon Spencer Blues Explosion touch! The last one is called “Murder Ballad” and I have to say that the whole atmosphere of the song is strongly influenced by Cave’s “Murder Ballads” record, creepy but trippy, a ‘slow-coming’ Psychotic Blues tune! So, it’s clearly obvious that the Time Travel they took back in 2016, was a journey back to Time (not forwards), and No Man’s Valley returned safely back home, bringing with them all these “good” vibes and recollections from the past, that are masterfully depicted into their unique style of music! “Outside The Dream” is a psychotic ‘esoteric’ record that you would Love till its last second! (TimeLord Michalis)

Get it directly from Tonzonen Records: