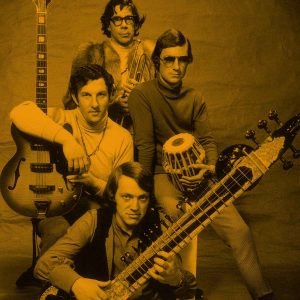 “Peeled” is another astonishing vinyl release by Pharaway Sounds through Guerssen Records by a late 60s-early 70s New Zealand band that managed to release just one 7 inch vinyl (extremely rare & collectible)! The rest of “Peeled” is filled with unreleased songs from the active years of the band!

The press release reads: “The 40 Watt Banana, formed in 1968, was a unique band in New Zealand, the only group that ventured into the esoteric realm of Indo-Afro psychedelic music. “Peeled” includes their sought-after 45 from 1971 (the sitar-psych-dancer “Nirvana”) plus previously unreleased recordings full of sitar, tabla, sarod, tanpura, trumpet, recorder, effects, tape echo… Formed by Kevin Clark and Dave Parsons, initially as a jazz combo playing in restaurants, they soon incorporated elements of Indian and African music to their sound, after some soul searching and spiritual experiences. The result was an atmospheric, spacey, improvised sound. In 1971, they released their only 45 for the HMV label. It featured a great sitar-psych track, “Nirvana”, similar to other psychedelic jazz-pop-funk experiments from the time such as “Mathar” by Dave Pike Set. But during the late 60s and early 70s, the band also recorded other stuff which has remained unreleased until now”…

So, “Peeled” consists of 9 unreleased songs plus their A side single “Nirvana” (I’m wondering why they didn’t include the B side “Fire And Rain”. Anyway the album kicks off with “Namaqua”, a ‘creature’ yells “Namaqua”, the piano starts and the weird sounds along with the tribal style of percussion and the horns are welcoming the listener into a mystical shamanic ritual! “Nirvana” (7” Single, 1971) is a psyched-out cool mantra song, sitar based and dreamy poppy flirting. “Amanzi” starts with various percussion sounds, studio effects and a cold trumpet playing while the beat is ‘entering’ at the 3rd minute, trumpet is now taking the lead and we have a perfect example of a World-Jazz funky tune! With an old Eastern-inspired sound, “Kharmatic Prelude” becomes the field where ‘trumpet’ and ‘sitar’ are having a psychedelic chat and nobody knows where this is leading… “Mrdangan Musings” is a short interlude based on tribal percussion while “Maharashna” is an Eastern psychedelic Mantra, sounding a kind of experimental, with a trippy trumpet sound and a bucolic touch, adventurous and weird enough, Miles Davis would loved to have taken part here! The earlier trumpet-sitar chat has now evolved on “Kharmatic Conversations” into a serious conversation where both instruments are improvising leading the tune into an Eastern-Impromptu Mantra-a-like tune! Trumpet is the only instrument on “Haryana”, creating a cool n’ relaxing but dark atmosphere. Once more the sitar-trumpet ‘duo’ shines here on “Duddle-Dup”, generating an Eastern-like psychedelic soundscape and along with some distinctive percussion, the whole sounding result is capable enough to open the Third Eye Vision, this is a cool experimental trippy raga! The album closes in a jazzy peaceful way with the 0:54 sec long “Namaqua Reprise”. Well, I really enjoyed this album a lot, it has a strong World feel and it manages to marry in a perfect way, Indian, Afro and Jazz music! A ‘Must’ Record… Recommended! (TimeLord Michalis)

Buy it through Guerssen Records: