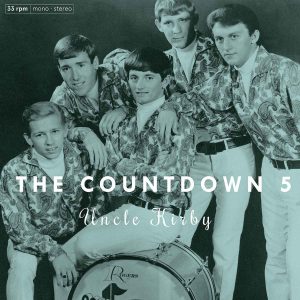 All you 60s freak music maniacs and collectors (generally) out there, you better watch out, this is a record that you should definitely grab and enrich your collection! The Countdown 5 were one of Galvenston’s premier rock bands during the 60s. They released 9 singles from 1965 through 1969 (on Pic, Cinema, Toucan, Polar, Saint Martin and Cobblestone labels). 3 of these Singles (A and B sides) are included here along with unreleased recordings taken off the Master Tapes from Andrus Studios in Houston, Texas.

The press release reads: “Galveston’s premier Psychedelic/Garage band! Here’s a compilation (1967-68) featuring a selection of their 45 sides for Toucan and Cobblestone (including the mod-psych classics “Uncle Kirby” and “Shaka Shaka Na Na”) plus some amazing studio tracks which were never released at the time. Fab Beatlesque / Anglophile psych with great vocal harmonies, jangly and fuzzy guitars, organ… Formed in Galveston in the mid-60s, the Countdown 5 were one of the leading psychedelic / garage bands from Texas. From sharing stage with legendary Houston groups like Moving Sidewalks, the Clique and 13th Floor Elevators and opening for big names like Paul Revere & The Raiders, they went to running their own label (Toucan) and were also part owners of the renowned Walter Andrus Studio, home to bands like the Elevators and Fever Tree. “Uncle Kirby” is focused on the psychedelic period of the band (1967-68), including their most psych sounding 45 sides (in original mono mixes) plus unreleased tracks recorded at Andrus Studios which had never been released on vinyl until now”…

So, let’s start with the 3 singles first. “Uncle Kirby (From Brazil)” is a Groovylicious Garage-Psych Anglo-flirting song that was originally released in 1967 backed with “Speculation”, a cool balladesque psych-a-like tune. “Time To Spare” was originally released in 1968 and it is another Anglophile Psych tune with some rich harmony vocals while the ‘B’ side of this, is called “Elevator” and it’s a phaser-effected psych-a-beat tune with a killer “Eight-Miles-High” guitar sounding! The last Single that is featured here it was released in 1969 and it is called “Shaka Shaka Na Na”, a groovy shake-a-delic upbeat party-like tune while its ‘B’ side is called “Money Man” a glorious happy psych tune full of US West Coast Sunshine and an intense late 60s Byrds feeling (once more my mind goes to that Eight Miles High beautiful riff)! The rest 8 songs that follow are ALL Previously Unreleased. “I gotta Keep What I Take” is an upbeat mod-ish psych tune while “Unfair To Me” is a mid-tempo song with a garage-psych beat and a haunted remarkable “Green Slime” Organ sound! “Candy” reminds me an extremely psychedelically LSD garagy version of “Tobacco Road”! “Sweet Talk” is a garagy tune full of Motown Soul while “Good Woman” has an intense West Coast feeling, excellent harmony vocals and a far-out psychedelic acid guitar sounding! “One Way Traffic” emerges a strong dance-Soul a-la Four Tops feeling and “Sally Greene” is a R n’ B stomper with a garage edge. The album closes with “Beneath My Rug” a rather strange tune, a blend of Bonniwell Music Machine with Fever Tree, amazingly Mind Blowing! “Uncle Kirby” is a great compilation record for every music maniac out there, Sixties or Not! (TimeLord Michalis)

Get it directly from Guerssen Records: 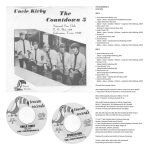 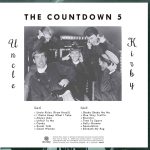