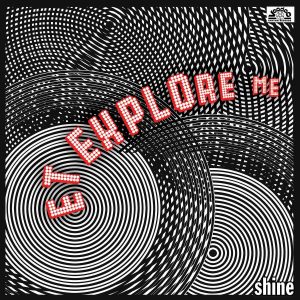 “Shine” is the debut album by a 17-year-old Dutch band! E.T. Explore Me is a Far Out Mind Expanding Psychedelic Punk Trio from Haarlem in the Netherlands with the unique ability to Squeeze you into an Organ grinding Fuzz Overdose Fest and Fly you to unknown dimensions… They have released so far 6 7 inch Singles and this is their debut full-length album. The Press Releases says it all: “Underground heroes of Haarlemtown in the Netherlands – saving the sewers of garage rock from the same old riff rock 17 years of distorted organ fuzz stripped down snare bare essence boogie thump of a bassline pumped out of mangled monster of an amp. From the gutted churches of the Spanish hillside to the cigarette stench beer belch glorious gutterstreet rock n roll holes of Holland, Germany and France, ET EXPLORE ME has been leaving beer soaked, sweat stained smiling and stinking rock n roll fans begging for more since 2002. Finally deciding to get their shit together and make a full album, ET EXPLORE ME delivers on wax exactly what they do live. Full on FUZZED out Freaks unleashed. You wanna party, you wanna dig deep into the trenches of treble and bass, you wanna – oh I know you wanna just have a good time don’t you! Don’t you now! Of course you do fool. And ET EXPLORE ME has got the rocknroll sniffin glue to get you higher than daylight. So buy this album, see this band, pour a beer over your head and shake your ass, pump your fist and whatever you do, when you get home after the show, don’t fall asleep in a puddle of your own piss…”

“Shine” consists of 12 psych-grinding punky dynamites and it kicks off with the dynamic garage-rock of “Let Me In”, a tune that is sprayed with huge amounts of dirty swamp n’ roll! The self-titled “Shine” is a 109 sec noisy & dark industrialized punk-ish song while “Psychonaut” is an electronically trashy & distorted tune creating a unique zombie cosmotrash atmosphere! “Soy Un Bruto” is a post-modern new-wave synth-psych tune while “Soulbleed” is a voodoo-ish psychotic swamp-blues number! The one that follows and clock-ticking to 7:27 is my personal favorite of the album, “H.Z. Statue” is a haunted and psychedelically thrashy tune, with mind-blending distorted fuzzy organ, filling the atmosphere with enormous doses of Acid-Daze coming directly from the Great Nether-Beat era! The zombie-ish trash punk n’ roll and organ driven “Onemanband” follows. “Demons” is drenched in the 80s New Wave while “Butcher” is a dirty distorted fuzzy surf n’ roller! Psych-o-Thrash Punk n’ roll on “Dig Me Baby” and dark swamp-psychic blues on “Ink”. The album closes with “Fincheye”, a remarkable & superb noir cosmotrashedelic tune! So, “Shine” is an “Outsider” album, a Rock n’ Roll album for Zombie-lized Voodoo People, Far out, Fuzzy and Freaky! (TimeLord Michalis)

Get it directly from Voodoo Rhythm Records: