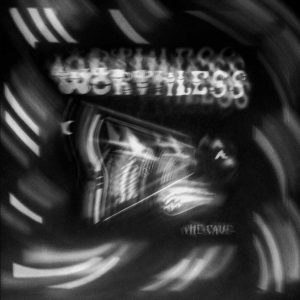 Worthless is an Odd Psych unit hailing from Brooklyn, New York, and since 2012 they have released 5 cassette-only-albums, 2 7inch Vinyl Singles and “The Cave” is their 3rd LP! Worthless is the musical vehicle of Curtis Godino, a musician and visual artist currently based in Brooklyn, NYC. Curtis also runs Drippy Eye Projections with Chaz Lord… “The Cave” album consists of just 6 songs, one of them occupies the whole ‘A’ side clock ticking at 19:45! The composition is called “Time’s Arrow” and without being sure I think I distinguished 5 parts. The 1st part has a bluesy start under an extreme PSYCH atmosphere (whatever that means) while the 2nd part moves into a more progressive path but in a colorful psychedelic way bringing to mind some of the earliest releases of Vertigo or Harvest. For the 3rd part, there’s a ‘passing’ through a playground or something, the landscape remains progressive – old-school of course – emerging an intense Atom Heart Mother feeling blended with a Genesis one (Nursery Cryme era) while the adventurous Organ Sound “unites” various Progressive Rock schools! The 4th part starts with weird sounds, backward noises and an aura of mid-70s Symphonic Rock while cooler Progressive vibes are overflooding the space and for the last 5th part, there’s a variety of effected sounds of a ‘might daily routine’ or something like that, presented with a cinematic and rather acoustic approach! So, after this almost 20min Psych-Prog Epos, I’m really curious about what I will confront on the other side… Side ‘B’ opens with “Fascination” a pompous experimental Progressive-Rock tune that transforms into a trippy n’ dreamy and full of nostalgia musical environment, a background that it could have been taken straight out of “More” or “La Vallee”! The next one is “Cosmic Lie (The Quantum Man)” and this tune has lyrics with some ethereal female vocals, the soundscape still remains complicatedly Progressive making the song a strange-effected ballad filled with huge amounts of some Cosmic Energy! That same Cosmic Energy overflows also into “Black Sheep”, another weird balladesque tune. “Wine Glasses” is a short (1:10) jazz-prog Zappaesque interlude while the album eventually closes with an Epic Progressive tune entitled “Scheele’s Green”, it starts in a mellow way sooner to be transformed into an out-of-control Space-Unit but ending in a sad melancholic cinematic way… Well… Wow! I mean Super Wow! Worthless managed to create an album full of musical excitements, an album with some of the finest Cerebral Psych-Prog music you’ll hear this day, this month, this year, this decade… An album that through ’68-’72 it can transport us to the nearby future! Surely, One of the Best Albums of 2019! Discover it! (TimeLord Michalis)

Get it through Forced Exposure Mailorder: