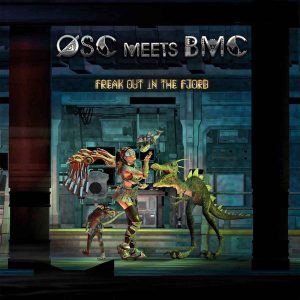 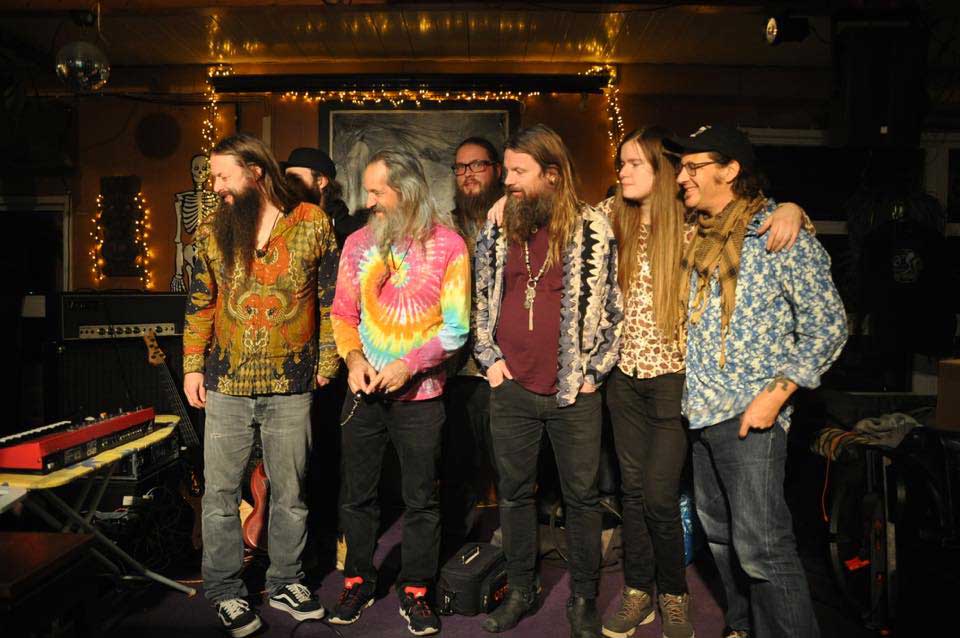 Listeners of our Radio Show and Readers of our Zine, of course are familiar with Scott Heller’s Spaceship called “Oresund Space Collective”. A collective of musicians from Denmark and Sweden on a mission to play totally improvised Space Rock music! Since 2006 they have released 29 records and they state that they’re playing “Music for your mind to escape the Matrix…” Faithful to their established (by now) Vinyl Rendezvous (3-4 times a year!!!) OSC have a new record, a collaboration with BMC and the press release reads: “In November 2017, Øresund Space Collective and Black Moon Circle played a show in Trondheim, Norway called “Freakout in the Fjord”, which also featured the local band, Red Mountains. The next day, we were booked into the excellent, Øra studio, one of the best in Trondheim for a jam session. It took a few hours to set up all the gear (2 guitar set ups, 2 bass set ups, 3 drums kits (yes, 3!), modular synth, Fender Rhodes and Oberheim synth and we were ready to go. Four jams were recorded ranging from Miles Davis inspired (Afterglow) to Grateful Dead (Dinner) to heavy space rock (Freakout). It is a hell of a 2hr musical journey.

So, what we have here is 4 long jam recordings, one on each side of the triple vinyl LP (yes, 2 of them had to be split in order to fit). “Rendezvous In The Nebula” (23:39 min) is a free-form improvised long jam (of course), built on spacey synth effects while the whole band is emerging an intense late 60s Frisco-Hippy scene feeling while the jam is ending in a marvelous Bluesy way. On the still-free-form (obviously) “Afterglow In The Sea Of Sirens” (23:55 min), it seems that the musicians are trying to “reproduce” the “Bitches Brew” atmosphere but with a more lay-back and hippie-like lazy approach, though after a while the track becomes progressively Space! “Dinner With Gregg A And Jerry G” (17:24 min & 17:31 min) occupies side ‘C’ and ‘D’ and do I have to mention who Gregg and Jerry are? A long improvised free-form jam in the style of Grateful Dead and Allman Brothers (there, I’ve said it!). Last but not least is the self-titled “Freak Out In The Fjord” (17:16 min & 19:11 min, sides ‘E’ and ‘F’ ), as the track slowly evolves, all musicians are leading their instruments into a Heavy Spacey and Spectacular Sound, improvising into a general ‘Space-Rock form’ but with a splendid ‘earthly’ approach. Of course, towards its end the track is moving in “domestic waters”, becoming EXTREMELY HEAVY SPACE! So, I found this kind of “experiment” of playing Space Rock music with a late 60s Hippie-like Rock style, really touchy and interesting, these 4 long jams are definitely not boring and you’re advised most likely to grab one copy asap! (TimeLord Michalis)