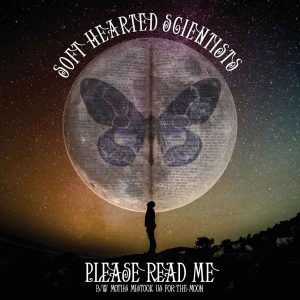 Our favorite Welsh Scientists, the Soft Hearted ones, from Cardiff, are back to the Fruits de Mer Catalogue with an exceptional Delicious vinyl Single! The press release reads:

“The Welsh cardiologically-inclined alchemists returned to the studio earlier this year after a lengthy break to record a cover for a year-end Fruits de Mer retrospective that we’re still working on – but the result was so strong I felt it deserved a single release in its own right and the band had such a good time they decided to work on a new song to go with it. So here we have The Bee Gees’ ‘Please Read Me’, a 60s pop-psych gem from the brothers Gibb with not the faintest whiff of cheese to it is given a magical makeover, paired with an all-new SHS song, ‘Moths Mistook Us For The Moon’, that’s just lovely and has that classic Soft Hearted Scientists sound”…

So, on the first Side of the Single the Scientists reinterpret “Please Read Me”, a 1967 Bee Gees tune (originally on “Bee Gees 1st” Album), and I have to admit that this is a very “suitable” song to the intellectually sophisticated poppy repertoire of the Soft Hearted Scientists, handling the original with love devotion and respect, presenting here a version full of Nostalgia! Nostalgia for the Future of the Past… On Side ‘B’ there’s an SHC original tune, entitled “Moths Mistook Us For The Moon” infused with that lovely tremendous and particular Soft Hearted Scientists atmosphere, a kind of balladesque song with a Country-Rock feeling, dressed with interesting and surreal lyrics, like the ones the band has used us to! (TimeLord Michalis)

Get it through Heyday’s Mailorder: