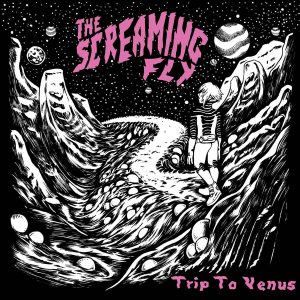 I’ve been friends with Stasinos (Stash), the bass player of this Athenian band, for quite a long time and I was wonderfully surprised when I learned about their sophomore “Trip To Venus” LP album after their 2011’s debut “Super Zero” LP! The Screaming Fly were formed back in 1992 and the band consists of Stef (Guitar, Voice), Stash (Bass) and C.I. (Drums). And, YES! Yes is the answer to your question. Three guys can make the job done! “Trip To Venus” consists of just 6 songs (3 on each vinyl side) clock ticking from 2:43 to 10:18 minutes. “Animal” opens the ‘A’ side. Despite the quite heavy beginning of the song, when the first whispering-like vocals hit you and in addition with the rest instruments, you can tell that something Different is going on here. Nothing to do with all these “In” boring Stoner/Metal bands that overwhelm us the last years! The guitar sound is electric, heavy too, but with a big dose of Yesterday’s Psych! Bass and drums are following the same path with the guitar. Not to speak about the huge Dive into Psychedelia that the track attempts to, towards its end! Becoming Psychedelically Trippy and Experimentally Lysergic, the song manages to raise an enormous Psychic Wall of Sound, drifting the listener into another Electric State of Mynd! “Dimension X” starts… What a cool fucking song is this? A fantastic rhythm that literally overflows the speakers, feeding your heart with the needed energy in order to keep beating! A demonic riff taken out of The Boss’s “I’m On Fire”, enriched with glorious Psychness, creating a mind-blowing Psychedelic Locomotive, including the best “killer” bass lines I heard ages ago! “Evol” is a short balladesque heavy tune, getting us back to the early 90’s and all these Indie-Alternative bands that were growing as Mushrooms destined to be lost in oblivion… Side ‘B’ opens with “Astro”, a spacey effected intro and a killer poisonous drum beat rhythm under a sonic guitar/frenzied bass background, making this a hot instrumental tune showing how tight this band is and also the “potentials” they have while their “Wall of Sound” is slowly starting to be built! There’s a tense to experiment with new (for the band) musical territories, for instance towards the end of the track the band is crossing the borders and steps in the Krautrock Zone! “Fall” is another heavy tune that acts like a well-tuned Rock N’ Roll machine while the album closes with “Fever”, the band develops a catchy semi-hard rock motive with a wondrous and trippy guitar sound, another cool Modern Rock N’ Roll tune with a Hazy Electric background, ending with the familiar (by now) band’s favorite fuzzy feedback! “Trip To Venus” is a Heavy Album without making you feel bored and believe me, THIS is an artistic achievement in these strange times we are living! Take the Trip… (TimeLord Michalis)