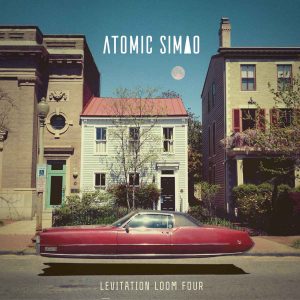 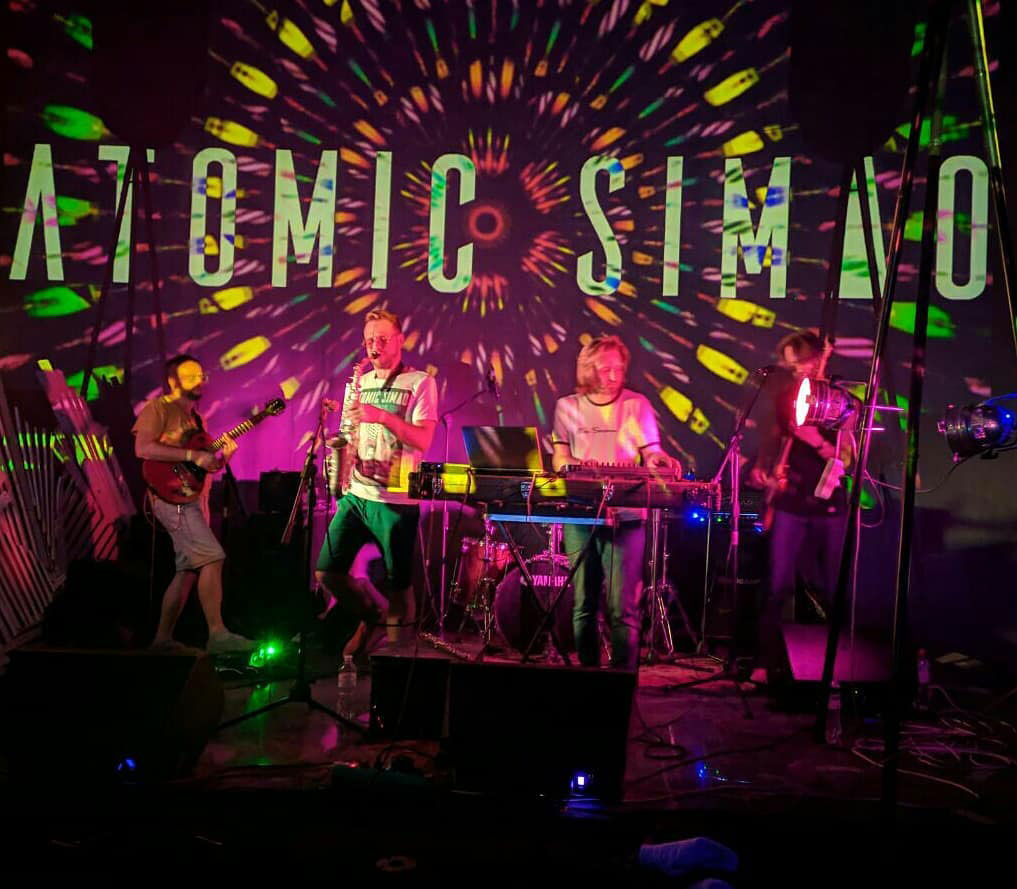 This is the 5th LP album by this exciting band of Cosmic Warriors called Atomic Simao, hailing from Kyiv, Ukraine! It was released digitally through their Bandcamp page on December 10th, 2018 while the physical release (LP Vinyl) came out on May 4th, 2019.

On Atomic Simao’s Bandcamp it says: “On Levitation Loom Four, the new album by Atomic Simao, several genres collides. The five-piece band from Kyiv (Ukraine) mainly plays instrumental music and combines Psychedelic with Space Rock, Acid Jazz, Funk and elements of Middle Eastern music. The child of a great wave of the ’60s and gets a big inspiration by electronic music of ’90s with a trippy sauce of acid-jazz. Levitation Loom Four contains eight tracks with different rhythms and moods and includes support from guest musicians on a few tracks. The sound is powerful, impulsive and incredibly catchy. Get ready for the blast-off!”

The album kicks off with “Kalypso”. At the beginning of the tune, an echoed voice speaks “Original Music… This One is True… This One is Real…” followed by a dynamic drum beat with a sharp psychedelic jazzy edge that overfloods the ‘space’ with a stunning shimmering sounding while the Magnificent Sax along with the remarkable proggy-spacey Keys are lifting this instrumental piece of music into a higher level of eternal esoteric consciousness this is High-Energy Trippy and Elevating Music for the Mind, the Body and the Soul of course! “Chemical Time Machine” starts in a mellow and rather psychedelically trippy way almost ambient-like, creating a marvelous and very atmospheric background while the musicians are unfolding their inspiring musical ideas, soon the track accelerates – double speeding – and the Chemical Reaction is in full progress! Imagine a TimeMachine moving with the speed of light entering a wormhole… A very Sharp-Psych sound reaching the limits of distortion, capable to melt your brains! A distorted kind of Modern Age Space Roll! The killer bass lines, the murderous drum beats, the Spacey Psychedelic effects along with the adventurous sharp Sax sound altogether are making “Warped” an uplifting Sci-Fi Psych Theme, supersonic, orbital and extremely Sun Ra-ish! Side ‘A’ closes with the only track that has lyrics, it’s called “Words Of Trouble” and features Katiko Purtseladze. This track is literally acting like the Fly in the Milk! A slow gentle balladesque kind of tune with very nice and warm female Soulish vocals, a fresh modern Soul-Jazzy song which is completely isolated from the previous tracks (in our minds only, of course), by now the Fly has turned to a Butterfly and the Milk into a field of chrysanthemums! Side ‘B’ opens with “Paper Towers”, the tune emerges a strong nostalgic and Groovylicious cinematic feeling, the Sax blends with wah-wah guitar creating a really cool soundtrack for a 70s “Blaxploitation” film! An instrumental piece of music full of rhythm and energy that makes you wanna dance under the strobe light… And I’m wondering, “Is this the same band with the first Side?”… OF COURSE, IT IS. “Flashing Meadows” is a more let-loose tune with a gorgeous Hippie-Late 70s-Disco feeling! What a combination of words… Hippie and Disco… The flute is making a Soulish Jazzy atmos with a trend to experiment while the Sax is really getting the listener to some Discotheque, late at night, with some Afro dudes and duchesses swinging to the sounds… Soon the track becomes an improvised dreamy piece of inspired music, becoming groovy despite its Hippie-Soulish ending! “Herb” starts and I’m asking myself “Is Shaft this guy that walks in?” Another beautiful Funky instrumental piece of music under the guidance of the skillful players which are improvising and letting the Sax shine so bright! The album closes with “Psychobell”, the sound becomes stronger, more heavy and more up-to-date with huge amounts of Acid thrown allover and a few pinches of Psych, here and there. Slowly and progressively the musical landscape starts to sound familiar with the 3 previous tracks of this side, a Psych-Funky Explosion! It seems that ATOMIC SIMAO are fond of making Expeditions to new Territories enriching them with an adventurous late 60s-early 70s Psychedelic Veil and for sure, the future hides more excitements for them and for us too! (TimeLord Michalis) 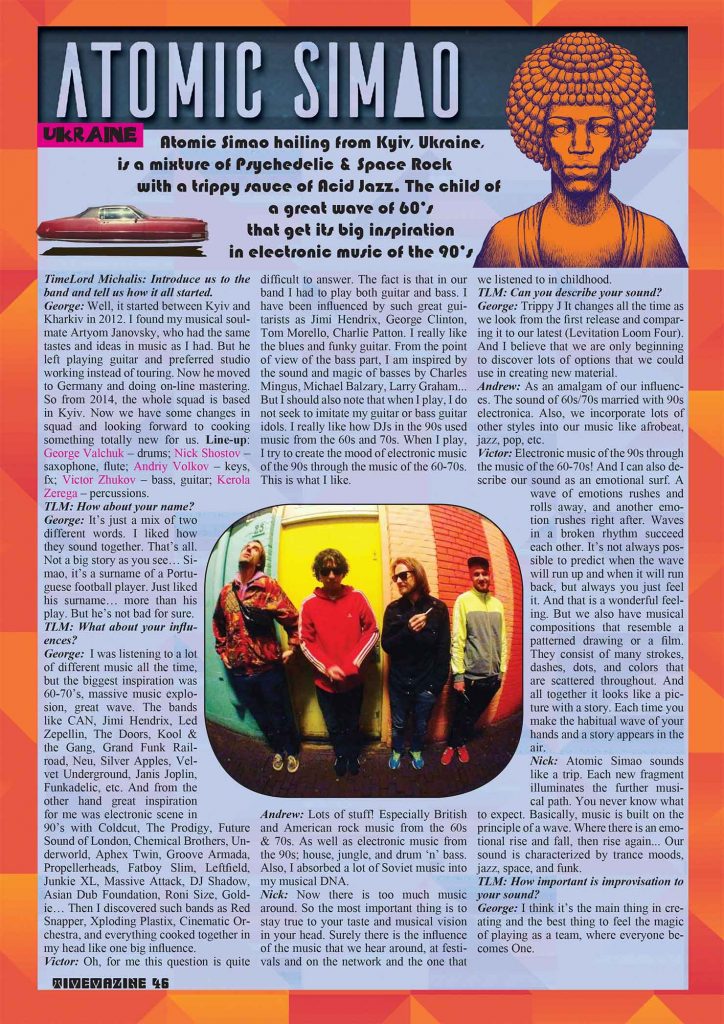 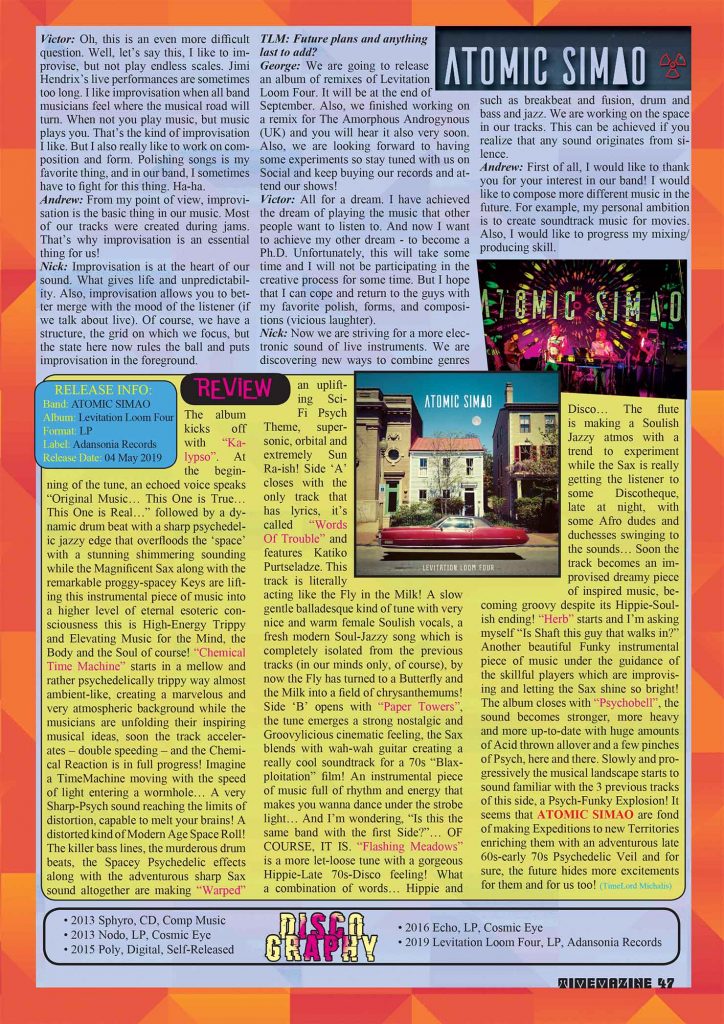