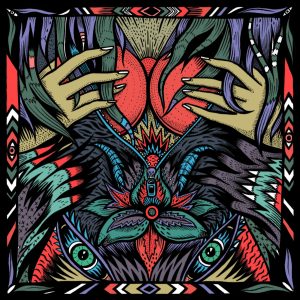 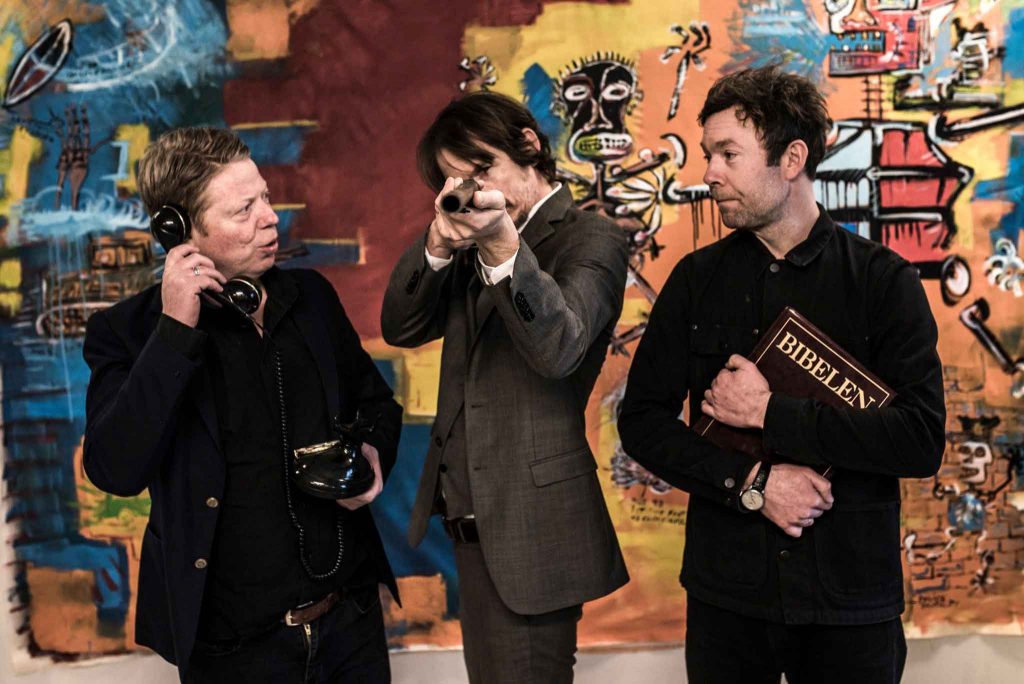 Well, when you come across this title “Afrobeat meets MC5 in Norwegian”, you will definitely be curious to read, to listen to explore… How is it possible 3 totally “different things” to be connected? And what will happen if I add to this equation the word “Kraut”? This may be disorientated, but when you start listening, note after note, melody after melody, rhythm after rhythm, song after song, everything is getting brighter and shinier and lucid and you can catch yourself saying “Yeap, now it makes sense!”…

Undergrünnen is a musical trio hailing from Haugesund, Norway started back in 2015 and “Ein revnande likegyldighet” is their second album and the press release through their Bandcamp states:

“Undergrünnen are finally ready with the follow-up to the critically lauded and Spellemann nominated debut album.

It was winter again and in Haugesund it rained, if possible, even more than before. There was nothing else to do for Undergrünnen but to barricade themselves in the studio and daydream of sweaty clubs and hot beaches. Roof leaks, the IRS, pining for fast money, deaths in the family and the monotonous bore of working for the post office, influenced and inspired the wild recording sessions that resulted in the new record.

With Ein revnande likegyldighet, the band takes their music even further than what the debut could. The production is more cheeky, the songwriting is sharper. The songs vary between the two-and-a-half-minute rocker “Burmavegen Baby” to the 15-minute afro-kraut-banger “Nå e me her”. The album consists of six songs that take the listener on a rhythmical excursion in hip-shaking, unclassifiable rock – in Norwegian.

The Undergrünnen of 2020 mixes 60’s psychedelia, afrobeat, jazz and minimalistic new wave, with Pål Jackman’s biting lyrics about life’s existential nonsense and the unbearable indifference of being. In other words, it still sounds unmistakably like Undergrünnen. As one writer noted on the former album: “It’s as though Paul Simon had eschewed Ladysmith Black Mambazo for ‘Graceland‘ and asked, say, The Monks or MC5 to be his backing band instead AND they sing in Norwegian”.

Ein revnande likegyldighet is released on Jansen Records May 29th 2020”…

So, “Ein revnande likegyldighet” (that translates to “A cracking indifference”) consists of 6 tracks, 3 on each side of the LP album. The album kicks off with “Bann Høgt”, an upbeat and full of rhythm tune with a distinctive groovylicious funky beat and “African” vibes all over, a tune that reminds me a lot of the “World Days” of David Byrne! “Ein Ny Stopp Ein Ny Start” has the same musical atmosphere as the previous tune, with an organ-sound ready to blow your cool! With a Manonegra aura and a slightly jazzy feel, Africa (West in particular) is all over here, too! “Hardt Å Slå På” has a frenzy exotic rhythm and a mind-blending middle section that dangerously flirts with West Coast Psychedelia inclosing Doors-like keys and Santana-esque guitars! It surely leads you to a wondrous place… Side B opens with “Burmavegen, Beibi”, some killer organ here, and a lot of interesting “things” in the background. What follows next, is 13 minutes of a musical paradise! “Nå¨E Me Her” is a feast of sound colors, a psychedelic afro-pandemonium of rhythms! Jungle and African beats are blending together creating a new musical hybrid! A tune that is capable enough to Psychedelize your Soul too! A Psychedelic Trip to the wild Savannah! A-M-A-Z-I-N-G!!! The album eventually closes with “Godmorgen, Søster”, with a funky “West Africa” guitar and marvelous vocals, locates the listener even deeper into the wonderful Black Continent… In conclusion, “Ein revnande likegyldighet” is a beautiful album that helps you to eliminate the distances! A magical album indeed! Imagine it this way… It’s Norway (or France or Greece or Japan or Mexico or…) inside your house, but right just outside of your window, it’s Mother Africa… From Norway to West Africa and back is about 10.500 kilometers… I did this journey in less than 40 minutes! One of the Best Albums of this strange 2020!!! TimeLord Michalis