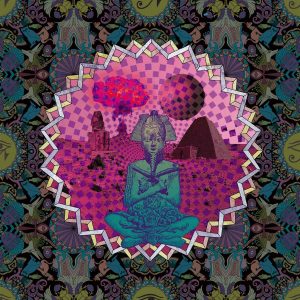 The Cosmic hippy acid folk Eastern psychedelic one-man project of Craig Williamson, Lamp Of The Universe, is back with his 15th album, the follow up to 2019’s “Align In The Fourth Dimension”, which is called “Dead Shrine”. I have been a follower of his/their music for the last years and I’m proud to say that every Lamp Of The Universe release reaches my personal list with the Best Albums of the year, so, here we are, reviewing another LotU album… I was closing the review of his previous album by saying “… it seems that Craig’s experiment to largely enrich his sitar-based sounds with electric/acoustic guitars is a successful one and by now after the first listening the gates to the Fourth Dimension are widely open! So, is Everybody In? The Ceremony is about to Begin… One of the Spiritually Ethereal Psych Best Records of 2019…”

“Dead Shrine” contains just 5 songs and it is obvious by the very beginning of the first song “The Eastern Run” that something is different here. Something has changed in the peaceful sunny relaxing Mantra-like Universe of the Lamp! The Light is no longer with us. Darkness has fallen… A heavy dark kind of Psych-Mantra with numerous bubbling spacey effects and distorted electric guitars… “The Eastern Run” blends with “Beams Of Ra”, although there are no fuzzy sounds, the heaviness of the sound remains, still dark, emerging a hallucinogenic feeling introducing a really trippy keyboard sounding… This one too, mixes with the next one, “Illuminations For The Divine”, now the scenery becomes bucolic, mystical. This is the typical characteristic Eastern-influenced LotU soundscape, an acidly drenched Mantra but still dark… Side B starts in the same “heavy” way as side A, with “Séance In Parallels”, a cosmically flavored tune with ecstatic heavy guitars. An Acid Kosmique Psychness is spread all over while the background remains dark and cold despite the trippy sitar middle section of the song, a tune that towards its end becomes something like a psychedelic liturgy! The album is closing with “Symbols”, a slightly different track, full of melancholic vibes and not getting away from the “typical” LotU Sound but after the first 4:30 minutes the scenery rapidly evolves into dark n’ fuzzy, a pompous “distorted” background, kind of poetic filled with psych-drama or something like that, this one could be the future soundtrack of a Religious movie film… So, in conclusion… Lamp Of The Universe delivered another Great LP! A magical album filled with Divine Cosmic Energy… And surely qualifies for the Best Albums of this strange 2020! TimeLord Michalis

Pre-Order the LP through Projection Records:

Lamp Of The Universe’s Bandcamp: