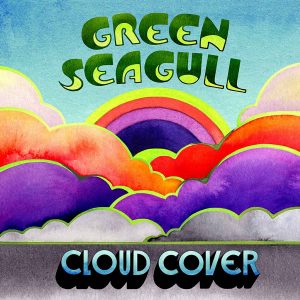 Green Seagull, our beloved psych-pop outfit from London is back with the follow-up album to their 2017 debut! The press release reads: “They’re back! Green Seagull are set to release their second long-playing record on Mega Dodo this July. ‘Cloud Cover’ sees them develop their fascination for melodic Sixties pop and combine it with glorious vocal harmonies to create a mellow Stateside vibe filtered through early ’70s UK acts like Brinsley Schwarz and Danny Kirwan-era Fleetwood Mac. Their shared enthusiasm for late-60s baroque psychedelia and 12-string jangle has blossomed into a prolific songwriting team that now includes contributions from their keyboardist Sarah Gonputh…

Taking their name from a mis-heard Rolling Stones lyric, Green Seagull formed in 2016 when Paul Nelson (New Electric Ride) approached Paul Milne (Hidden Masters / Magnetic Mind) to work on some songs together. Since then, Green Seagull has released a string of singles, received glowing reviews and regular airplay on UK national and local radio. ‘Cloud Cover’ will be released on 31st July as a limited pressing LP, CD & Download”…

“Cloud Cover” consists of 12 songs, 10 new ones plus both sides of their last 7-inch vinyl, “Simeon Brown / Belladonna” (for those who didn’t manage to grab one of the 300 limited edition green copies) An album full of ethereal Pop melodies and Power-Pop magnificence! I really like how the band easily trips back to the late west coast L.A. sixties on the song “Little Lady (In The Amplifier)”, amazingly blending a Millennium psych-atmosphere with Brian Wilson’s melodic aura and Love’s musicality! And how they can easily step to the funky pop-disco-flirting of the 70s with their Groovylicious “Live In Lover”! But, the Masterpiece over here is called “This Wheel”… Pop! Prog! 70s! Kansas, Supertramp, Pavlov’s Dog! All here, under a superb psych-veil! Even pinches of Dark Side Of The Moon! Incredibly awesome!!! Too bad it’s only 4 minutes long… As for the last 2 songs that are taken from their 2019 Single, this is what I wrote last year: “Simeon Brown” is a sophisticated poppy tune with a clearly yesterday’s touch (early 70s), nice rich vocals under a well-orchestrated baroque-proggy environment emerging an intense nostalgic feeling… Things are rapidly changing on the other side, though. “Belladonna” is an amazing melodic groovylicious happy cool song with a ‘psych’ tint and a garagy approach becoming art-pop-psych-a-like with some heavy doses of progressivism”… In conclusion, Green Seagull delivered another great and remarkable album that looks like a musical Oasis among the countless Brit Pop garbage … “Cloud Cover” combines freshness, quality, and melody! A certain Top 10 back in the day… Invest… TimeLord Michalis

Get it directly though Mega Dodo Records:

Get it through Shiny Beast: