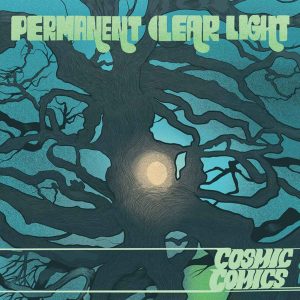 7 years already passed after the debut release of Permanent Clear Light’s magnificent “Beyond These Things” (CDR, Havasupai Records, 2013 Finland and LP, G.O.D. Records, 2015, Greece) and the time has come for the follow-up album, this time released through Sulatron Records.

The press release reads: “Sulatron is proud to release a superb psychedelic pop album by Finland’s number one band for fantastic earworms in a psychedelic way! Permanent Clear Light is often referred to as Finland’s top psychedelic group. They released their debut album, Beyond These Things, in 2014 to a high critical acclaim. After that, the group has released several singles, EPs and appeared on a number of compilation albums on the British Fruits de Mer label. Although PCL’s musical roots lie in 60’s psychedelia their sound is strictly contemporary. The trio considers the recording studio their main instrument, and their sound is characterized by multi-layered instrumental work and strong melodic vocals. After a creative break, PCL is finally ready to release its 2nd album, Cosmic Comics, which shows that the band has traveled a long way through the spheres since their debut”…

Permanent Clear Light consists of Markku Helin on lead guitar, synth & percussion, Arto Kakko on drums, bass, guitar, keys & vocals, and Matti Laitinen on lead vocals, synth & percussion. It is worth mentioning that the mastering for all tracks was done by legendary Eroc. “Cosmic Comics” contains 9 songs with a total duration time of 44 minutes. The opener “The Quiet Smiling Man” along with “Maurice N’est Pas La” and “One In Five” were originally released in 2018 as a 7-inch vinyl single entitled “Maurice N’est Pas La” through Fruits de Mer Records (Winkle 31). All 3 tracks are presented here slightly differently. “This Quiet Smiling Man”, written for Robert Oppenheimer, is extremely topical these days (due to certain idiot Presidents around the world – as Markku says)! The guitar riff reminds me of a druggier “Dark Side Of The Mushroom” while the song towards its end becomes Doors-like! “Maurice N’est Pas La” is an amalgam of cosmic disco psych funk sound with a groovy beat, dynamic solid drumming, burn-like-hell bass guitar, shimmering synth, and distinctive theremin and “One In Five” is a more straightforward pop-rock song referring to recent research according to which 20% of adult Finns have at some point of their lives suffered from mental disorders. Mellotron, keyboards, bass, drums, fewer guitars, nice harmony vocals and you will “hear the grass grow”… “Corneville Skyline” is another song that originally released in a very limited lathe split single in 2015 for the Series “Friend Of The Fish” of Fruits de Mer Records [Ex Norwegian / Permanent Clear Light – Friends Of The Fish (America Meets Finland)], a song in which sunny L.A. 67 meets foggy London 68. The rest 5 songs are new ones. “Peasants And Peons” with its psychedelic effects and the psychic melancholic melody is getting us closer to London, reminding moments from Kink’s “Green Preservation Society”. “Iris Murray” has a sad melancholic acoustic start that slowly develops a folkie-psych musical pattern, quite experimental with backward guitar sounding becoming kind of cinematic and spacey-like towards its end. This is one of the best “moments” here, along with “Salmiac”, a rather jazzy-psych improvised tune that PCL hasn’t used us to, a track that blends new age-space music with “foreign”/non-English vocals… “Until The End Of Time” is an acoustic “naked” gospel-like ballad with church-organ and eventually the album closes with “The Rip”, the whole approach and recording of this last song give the feeling of a demo recording, a balladesque tune, quite experimental towards its end… “Cosmic Comics” is a good album, a pleasant one that will not get you to feel bored, so all aficionados go grab it… TimeLord Michalis

Get it directly through Sulatron Records