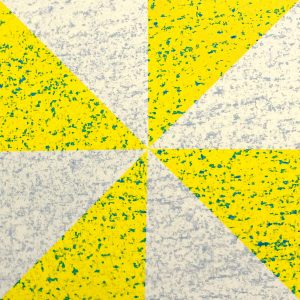 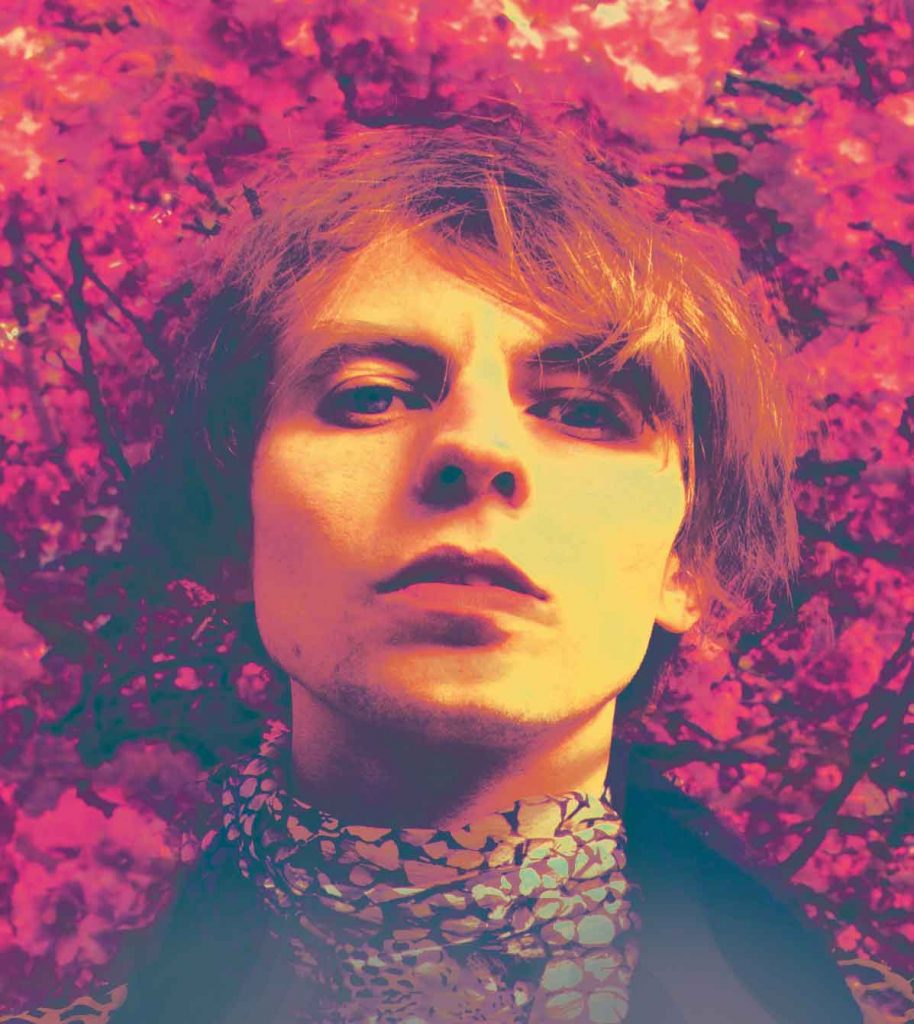 “Lichtpyramide” is a Kosmische project by one of my favorite artists, Jack Ellister. Jack, made this album on a 4 track loop station utilizing various synthesizers, guitars, and effect boxes. All tracks were recorded onto Otari MX5050 iii through Soundtech Series A desk and some outboard signal processors. Of course, all instruments and voices are by Jack Ellister… “Lichtpyramide” is an Experiment. Various ideas that Jack had in mind and thought that it was about time to “share” with the people. “Lichtpyramide” is a very DIFFERENT Album. A strange one. An album not made for the masses… An album that addresses to…

But, let’s read what Tonzonen Records’ Press Release has to say: “Having been featured prominently in TimeMazine, Eclipsed and Shindig! and voted favorite solo artist by the Fruits de Mer records extended family, Jack Ellister is one of those rarefied sore thumbs sitting on the outer edges of the great psychedelic cosmos crafting wired and weird kaleidoscopic classics, with the occasional airplay on BBC radio by Stuart Maconie or Nick Luscombe.

The first side of this LP was released on CDr, as a gig exclusive last November at the Fruits De Mer & Megadodo labelnight in Bristol. The second side is a selection of similar, more recent recordings, some of which were published on his Bandcamp page.

If you know his previous catalog, this album might surprise you (or not, as there were such bits already on his ‘Telegraph Hill’ album, released on the Spanish ‘You Are The Cosmos!’ in 2018), and hopefully pleasantly so, as he steps away even more from what are traditionally termed the songwriting and influences of his first couple of albums, and delves instead into experiment and improvisation.

The titles and text are predominantly German, but there’s also Polish and English ones. This is to underline his striving for the original ambitions of the krautrock originators: to create a cosmic music, hopefully something spiritually enhancing that is free from borders or genre pre-conceptions (at least as far as reasonable without losing it completely). On this album the tracks are transitioning from one to the next without interruption, to create more the feel of a continuous journey through various areas of a constantly changing landscape”…

So, more or less you got an idea of what is going on inside “Lichtpyramide”. It consists of 14 musical creations that are spread throughout the 47 minutes of the album. The opener “Der Schiffer” sets the scene, an experimental, electronically flavored improvisational scene that will take place for all 14 tracks. The dark ambient feeling that is emerging from “Der Schiffer” becomes even darker on “Das Wesen Des Seins”, it dives into the glorious German Underground of the early 70s, with a subterranean psych-cosmic beat that refers to Tangerine Dream’s early days… “Szyszka” is a short moody electronic experiment while on “D.A.E.L.” the acoustic guitar with this tremendous melody (that I’m still smashing my head to remember what reminds me) makes the scenery dreamy and quite sentimental. The self-titled “Lichtpyramide” transmits radio-active Kosmische Energy that covers everything, a daemonic chord-harmony taken straight out of “Tubular Bells” haunts the tune and leaving you at the end with a sense of unfinished… “Funkelnder Wein” is another quite experimental ambient-flirting tune while on “You’ve Only To Say The Word”, Jack continues his experimental trip with the sounds coming from electronic machinery, here he uses acoustic guitars that along with his monologue the track transforms into a lovely electro-ambient balladesque tune dipped into nostalgia. “Festtagszug” is a spacey Kosmische tune interestingly flirting with a psychedelic/progressive sounding. “Glow In The Room” has a dark kind of cold industrialized atmosphere emerging a strong feeling of isolation… It’s really amazing how Jack manages with this kind of music to “extract” feelings from the listener… “Stand Auf” is a strange experimental tune with a cinematic feel, blending acoustic guitars with electronic sounds, an eerie tune indeed… “Korytarz” blends electronic environment creating a unique spacey Kosmische atmosphere! “Das Rufen” acts like an electronically deep-effected interlude while “Bergwanderung” is a dreamy melancholic tune with waves-sounding and brilliant acoustic guitars… The album closes with “At The Beach”, under a serene and ambient-like soundscape, unfolds a Kosmische-psych pattern, reminding the beginning of the album, an ideal ending for such a kind of musical Trip… So, “Lichtpyramide” is not an easy album. With “Lichtpyramide”, Jack, not only agitates the stagnant waters, but he also mixes them with some rare ingredients, ones that Jack hasn’t used us! Is this album “marking” a new chapter to Jack’s musical creativity? Or it’s just covering Jack’s “need” to experiment and to explore new territories? I believe that sooner or later we will find out… Till then, I’m going to say just this: Jack made a difficult album full of electronic/acoustic Kosmische music for all you Open-Minded Freaks out there… And personally, I freakin’ enjoyed it… TimeLord Michalis

Listen to the Album through Jack Ellister’s Bandcamp

Order it from Tonzonen Records 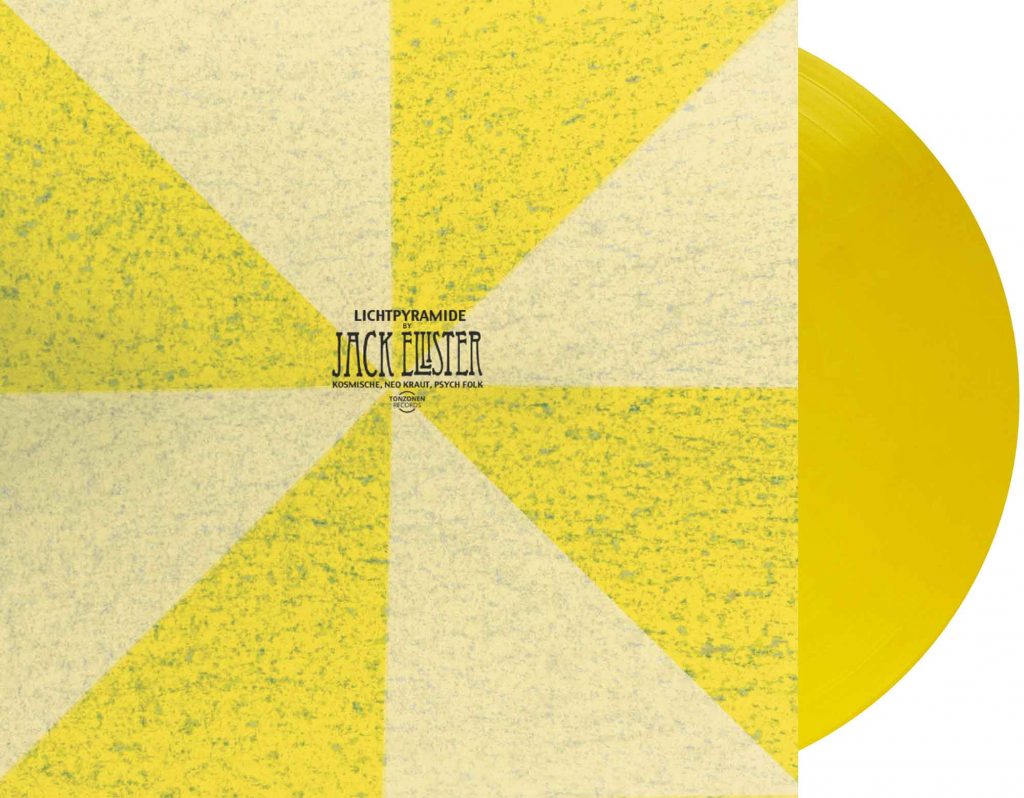