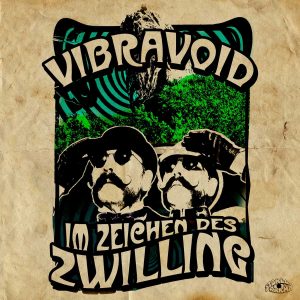 “Im Zeichen Des Zwilling” is Vibravoid’s latest adventure. It’s a double LP containing the music – film score – that Dr. Koch wrote for his own short film plus a few bonus tracks. To get an idea about the movie let’s check the press release: “Vibravoid and film that sounds logical – because the visual aspect has always been an important part of the Vibravoid art. Deeply rooted in the light art tradition of his hometown, the doctor is now presenting his first feature film “In the Sign of the Twin”. The mysterious events in a Victorian dream world beyond metaphysics are so impressively and skillfully implemented that it is surprising that this is not just a first work, but also a production without a budget. Even more, from screenplay, camera, editing to directing, the doctor is responsible, who plays all roles himself, composed the soundtrack and has to speak of an artistic genius! Surprisingly, the doctor refers to the expressionist silent film by Robert Wiene or Fritz Lang with significant influences by the film artist Karel Zeman and thus creates a completely new form of expression and film language of modern psychedelic cinema in 2019. The film impresses both with real film sequences and through Collage animations.  It is entirely in sepia and particularly visualizes the atmosphere of the late 19th century. The atmospheric density and narrative power of “In the Sign of the Twin” swallow the viewer completely and enable them to immerse themselves in the wonder world of the subconscious. In addition to the grandiose optical implementation, the soundtrack also plays an equally important role – somewhere between jazz, noise and musique concrete, a perfect sound universe opens up that transcends the limits of reality and opens the gates of perception wide. “In the Sign of the Twin – Above and Beyond Time” is new film art from Düsseldorf”…

The first record consists of just one long track, “Im Zeichen Des Zwillen” divided to the 2 sides. While listening to the soundtrack, multiple thoughts are overflooding my mind. Like which came first to Dr. Koch’s mind, the silent movie, or the music? I can tell that there’s a bidirectional related thing here. It can work both ways. The silent movie inspired the soundtrack. But, since I haven’t seen that movie yet, I can easily say – from what I hear on both sides – that the music, the Vibravoid music inspired the Movie! Hmmm… But, this is of no importance here…

Anyhow, this is another “secret” talent that Christian (Dr. Koch) has and nobody (almost) wasn’t aware of! Writing music for films! Film Scores, indeed!!! The beginning is quite dark and experimental too. A steam engine/locomotive start its engines and the journey begins. A magical harp sound and some tricky dreamy Hammond Organ sounds are leading the way. The music is mixed with various noises, abstract but specific too. The wind blows… The sax fills the air with some experimental hot but cool sounds… Dark and scary jungle soundings… Heartbeats or what? Illusion or disillusion? Tick tock… Time is running backward… Music, noises, sounds are completely tighten-up with the screenshot pictures of the movie that are presented in the brochure/magazine that accompanies this vinyl release. Listening and watching simultaneously… You may get an idea of the movie about mind time-travel to another place and era but there are so many gaps in the story-pictures, gaps you cannot fill, but all of a sudden the music acts as the necessary fuel so your precious imagination starts to produce stories and different scenarios inside your mind… The music flows… The pictures flow… Imagination running wild… What’s happening inside my mind? … In the meantime, deep inside the jungle, there’s another world over there… a magical one, over-exposed in front of my very own eyes… Is it side 2? 1 again? I’ve lost my mind… Library 60s music? Avant-garde Jazz music on an intense windy night? Futuristic Library music?

Second Record (Bonus tracks): “The Essence Of Noise” (Side C1) is a 19min tune that was originally included on Vibravoid’s previous summer 2020 release album “The Decomposition Of Noise” (Read Review) and here we have a live version of this track as performed by Vibravoid in 2019 at the Film Premiere of “Im Zeichen Des Zwilling”. A long improvisational piece of music combining samples of female voices, various noises, stylophone sounds. A really deep, mind-altering, and quite experimental tune but only till the beat and that swirling-psych guitar sound takes the lead and inevitably make us (listeners) all true witnesses of a mind-blowing psychedelic experience. “Fernsehapparat” (Side C2) is a short tune, soundtrack from the first experimental Vibravoid film (???), coming from the faraway 1990, noisy with lots of echoed vocals, an abstract beat, a pinch of acid guitar sound. Quite trippy, scary, and super experimental. Side 4 (D4) belongs to “Krautfaktor II”, a 1992 recording session, restored from original tapes with the original tape machines. Improvised, experimental (of course!!!) with a plethora of effected noises, signals, and guitar soundings, all blended together under a colorful trance-a-like electronic colorful umbrella! Reminds early 90’s experimental “dance” music, with generators producing tons of acid sounds causing serious brain damages…

So, “Im Zeichen Des Zwilling” is the result of Doktor’s effort to explore every single dark corner of his Psychedelic Mind! Thereby, Vibravoid is pushing the boundaries, creating new limits, and opening up new horizons! Be aware, because this is not an easy album! It’s a different Vibravoid album. You may call it New Age Psychedelic Experimental Film Score music or whatever else you want… I call it an “Artistic Statement” and a further step to Vibravoid’s exciting Psychedelic Galaxy of Sounds! TimeLord Michalis

Buy the Album directly through Vibravoid 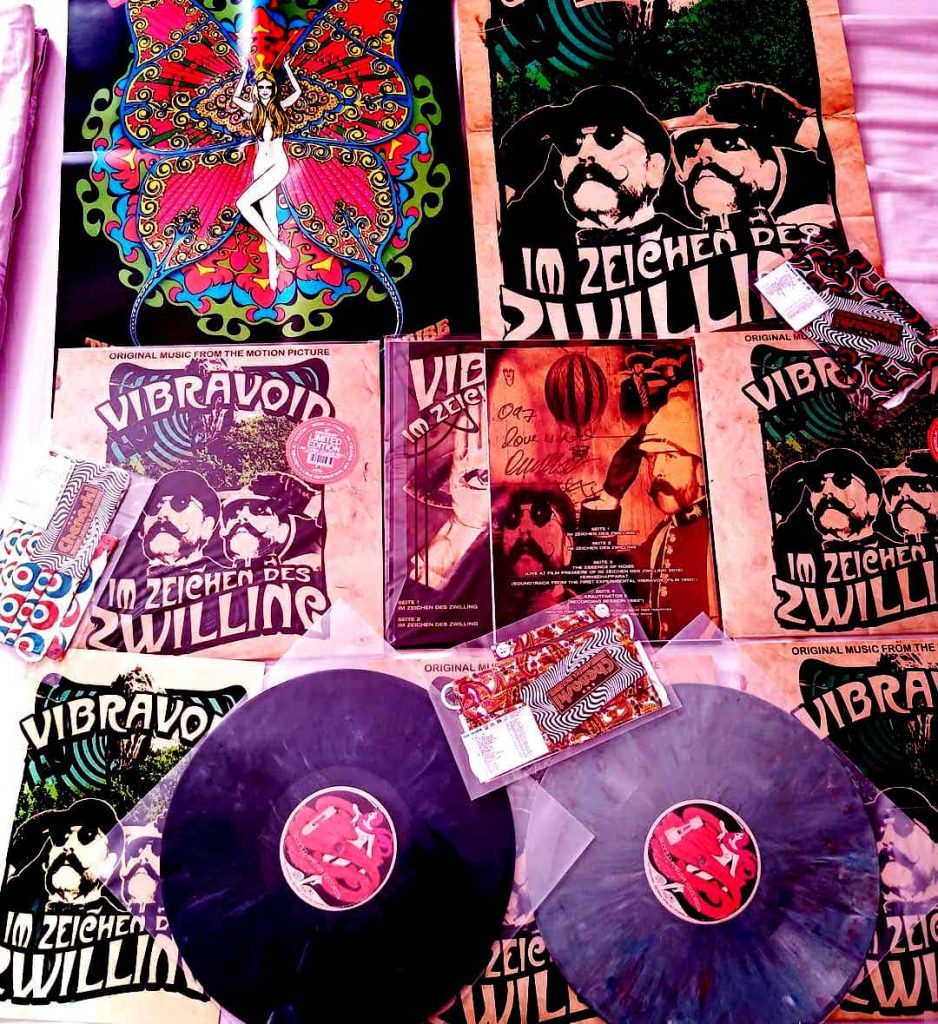