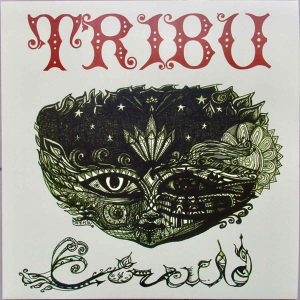 What the hell happened and this Gem had slipped under my radar? Anyway, I will make up by writing something about one of the Best Record releases of the last 2 years… “Circulo” was originally issued in late 2018 via Catrina Records, only on CD format. Clostridium Records gave it an LP release, last autumn (2019)…

Here are a few words to see what is this all about:

“Bochum based Clostridium Records and Lima’s new label Catrina Records are proud to announce the exclusive, worldwide vinyl release of Peruvian Shamanistic Psychedelic Shoegaze duo TRIBU’s debut album, Círculo.
TRIBU was formed in late 2016 by singer multi-instrumentalist Yazmín Cuadros and Richard Nossar of (Don Juan) Matus fame in the archaeological monument of Chavín de Huantar, a place which was the administrative and religious center of the Chavín culture, built and occupied approximately between 1500 and 300 AC.

The album, which earned a record of the year accolades in Peruvian underground and mainstream media, was originally issued in late 2018 via Catrina Records, only on CD format, making this the first time the album’s available worldwide in an analog format”…

“Circulo” consists of 8 songs, 4 on each side of the LP. The opener “El Camino de las Luciernagas” is a folklore tune, the subterrestrial Psych keys are creating a dark kind of bucolic acoustic environment, the air is filled with magical crickets, no electricity, it’s all dark except that stunning moonlight, light and darkness are blending together… And those lovely female vocals of Yazmín… Divine… “Llegando al Sol” starts… Let there be light! Electricity takes over the place! A wonderful electric-rock-ballad with a great guitar melody, electrical guitar vibes are spreading all over and making love with these amazing sweet melancholic female vocals… “Oire” is a soft but eerie tune with a tremendous Dark White ethereal Psychedelic aura… wishing this piece would last 20, 30, 40 minutes more… Side ‘A’ is closing with “After Dark”, the keys are creating a superb fantastic neo-psychedelic scenery, Richard recites, under a lazy psych background the sax adds a weird free-jazzy shade of melancholy, a late-night tune for sure. Side ‘B’ opens with “Todos los Jaguares (Canto Para Yana)”, there’s a primitive atmosphere with a metaphysical edge all over… A creepy eerie intro sets the scene somewhere under the Nazca Lines… Shamanic vibes under a moody folkie pastoral background. A ceremony. A ritual. Sounds from the jungle, time and space collide resulting in a dark tunnel, Yazmín’s voice is the leading getaway light… “Viento” is a dark psych mystical tune with an extremely eerie psychedelic soundscape and lovely female whispering vocals. The Shamanic bucolic scenery returns with the track “Nube Roja”, the ritual continues and for once more those magnificent psych-keys are creating a mysterious almost hallucinogenic atmosphere, seems like the whole place is sprayed with tons of peyote… Mind-Blowing! Eventually, the album closes with the short “Dice Ser”, a soft n’ slow tune, almost acoustic, with serene waves and a pinch of exotic brushstroke leaving you with the question “why this has to end”… So, despite its short length, “Circulo” is a remarkable album that will satisfy every single corner of your brain and will paint every grey area of your soul! I don’t know if this duo has plans for a follow-up album but I will be anxiously and patiently waiting for… TimeLord Michalis

Get it from Clostridium Records or from Shiny Beast Mailorder