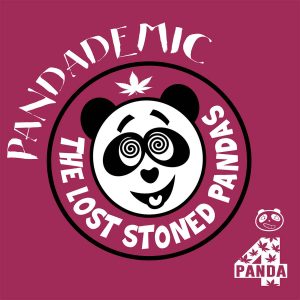 This Panda-gang (Sendelica related) managed/succeeded in less than 2 years, to release 4 albums! “Panda 4 – Pandemic” is a mini-album, consisted of 3 tracks and recorded during the quarantine lockdown, April – June 2020. It’s digitally released through the band’s Bandcamp (7th August) and the Vinyl/CD release is scheduled for the 1st of October. The short press-release info reads: “Halfway through the great lockdown of 2020 a couple of Stoned Pandas and The Orb hatched a plan of remixing each other’s music. Out of that germ of an idea emerged this mini-album. As all the protagonists were in self-isolation the net was the alchemists’ crucible from which the tracks emerged”…

The music here is provided by Panda Pete (guitars, mellotron, samples), Panda Colin (keys, beats, samples), Panda LX & Michael (keys, beats, samples). Side ‘A’ occupies 2 tracks. The opener “The Great Lockdown 2020 (The Orb’s Freedom Over Fear Mix)” is a danceable tune with a groovy beat, a track that somehow flirts with a kind of New-Age-Space music. It has a cinematic feel and a slightly industrialized Trance-y edge! Is this some kind of Futuristic Club Music?… The other track is called “Lazy Anyday Afternoon” and there’s a 180 degrees turn by the band! The scenery becomes acoustic, stoned (no stoner), serene with a kind of mixed lazy ambient atmosphere. On side ‘B’ the Panda band presents another mix of the first track “The Great Lockdown 2020” called Consterdine’s Dr. Benway’s Cure Mix and it’s more than 14 minutes. There’s an effected-intro with samples from lots of different birds’ singing but the music (or non-music) here gives you a feeling of an isolated dark cold abandoned area… But when that “Groovy Beat” takes the lead, the whole place is transformed into a colorful dance-floor – full of freaks – of a weird club located in an abandoned planet in some distant galaxy, billions of light-years away… Is this the Future Sound Of…? Maybe… A Pandemic-ally Beauteous Album… Grab it… TimeLord Michalis

Listen / Grab it through The Lost Stoned Pandas Bandcamp

alternatively, get it from Shiny Beast Mailorder