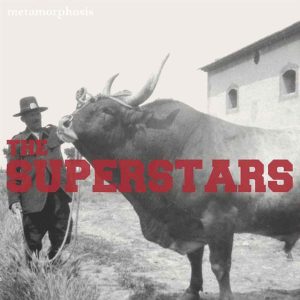 The Superstars is a new band hailing from Italy and this 7inch Single acts like a precursor to their debut album scheduled for release sometime in 2021. It’s released through Fruits de Mer Records label and this is what Keith (the boss) of FdM has to say: “It’s the classic Prog sound from Italy (although at least one of the band lives in Germany) or it is in my book, with keyboards to the forefront; that said, the band say they are influenced by the sounds of Tame Impala, Pink Floyd, Genesis and Simon & Garfunkel! They’re working to complete an album, but it was a mainly instrumental cut called ‘Metamorphosis’ that grabbed my attention, when they first got in touch with me, and on this 7″ EP you get both live and studio versions of it, along with a track called ‘Finale’; I’d suggest it’s guaranteed to put a smile on the face of any 70s prog fans. The Single is a taster for The Superstars’ LP, planned to be released in 2021; and while preparing for their debut, the trio are already working at a new project, an entirely instrumental LP… Where did the band name come from? I asked band leader Federico to explain… “….it came up pretty much by chance. There are two of us (guitar and keyboard) who are playing together since a long time in different band formations. Over the time we wrote a multitude of songs together. We decided to record a selection of them and thus the name of the album “Greatest Hits”. “The Superstars” is more a consequence of the name of the record; more or less a playful answer to the generic question of “who would normally write a greatest hits album?”… but coming to think of it, the reference to Jesus Christ Superstar is not completely off track, we even covered Gethsemane a couple years back”…

The Single contains 3 songs, a studio and a live version of “Metamorphosis” and the track “Finale”. “Metamorphosis” moves into the old-fashioned Prog-Rock path (early Vertigo era), the band breathes a cool and fresh air all over, sometimes the keys remind me of early Eloy, the guitars are mid-70s Floyd inspired (of course!) and the band has the ability to drive the tune to a Space-Art-Rock direction, how cool is that? The ‘Live’ version of the song only proves that The Superstars are a tight Live-Act as well, able to perform their kind of inspired Progressive-Rock, outside the safety of a studio… “Finale” is a wonderful short tune (2:49min), drenched with that lovely 70s keyboard futuristic sound! So, if this is just a “taster” then, I had built up my appetite for more! TimeLord Michalis

Get it through Fruits de Mer Records

or alternatively via Shiny Beast Mailorder