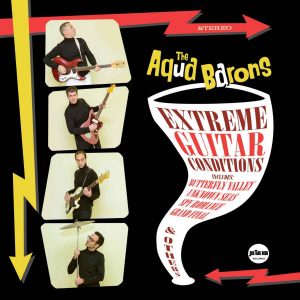 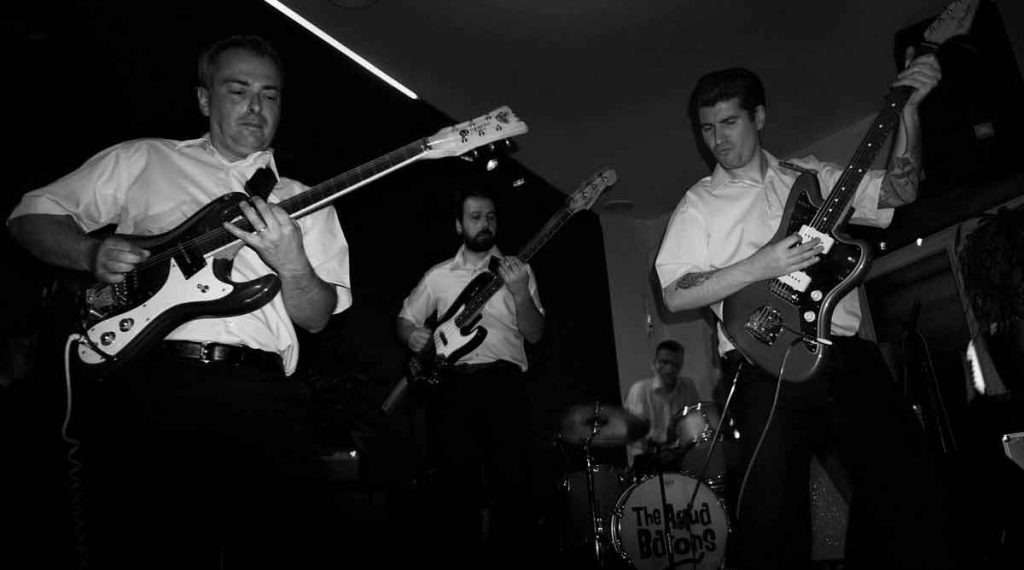 Label: Get That Beat Records

The Aqua Barons is a Greek instrumental band, Surf oriented and 60s influenced, and “Extreme Guitar Conditions” is their follow-up to their 2016 debut album “Southeast Stompers”. The album is released – physically and digitally – through Get That Beat Records; a new independent label based in Essex (England) established by the restless spirit of a Greek Underground Garage persona named Chris Triantis that he is relocated to England. The highly informative press release leaves nothing unexplained and it surely puts you in the mood of the record: “The Aqua Barons were formed in January 2010 in Lechaion, Corinth by the two brothers Petros & Philippos Sotiropoulos, they really dig vintage gear & influenced from traditional So-Cal surf music, with guitars soaked in reverb and fuzz, and from the lyricism of the European instro bands from the 60’s as well!!! Their 1st instro-strike was in 2014 via the comp “Searching For Atlantis”, including the ab-fab tracks “Osonupo” & “Fuzzlalum” & their 1st full-length released two years later called “Southeast Stompers” (Green Cookie Rec.). The same year the instro magazine Continental, picked up “Into The Deep” for the CD-comp # 24!! Their 2nd full-length “Extreme Guitar Conditions” is out, gathering 10 brilliant tracks! The opening track “Spy Romance” is one of the best instrumentals ever written & I mean it, a catchy melody that will stuck on your mind, an up-tempo with fuzzed guitar parts, as well a bubble-up organ make this one a real masterpiece!!! “Galaxy Cruise” & “Jungle Calling” will travel you in a perfumed instro-exotica garden, while “Butterfly Valley” is another fave instro with nostalgic-bittersweet mood & “Town Of Shelter” is the perfect soundtrack for a movie, dealing with a ghost town, or maybe in far west where outlaws seek protection from their predators?! (as Petros said). “Crazy Orbits” is an alternate space-instro-oddity, blended with Beat Oscillator sounds, a shot to the moon & back to planet earth!! You’ll find also a 2nd & slightly different version titled “Crazy Orbits (English Spaceman)”! “Gulag Party” is a fab drenched instro with Polka flashes, while “Unknown Seas” is a trippy tune with excellent guitar work, backed with nice backing vocals and Doo-Wop feeling & “Grand Finale” is a weird encounter with vibraphone, a mash of goosebump-melodies, kinda of like John Barry meet Henry Mancini’s compositions!!! A must have for the reverb-heads, an instro-blast for any rock’n’roll fan out there!!! Don’t miss this album for any reason!!!”…

“Extreme Guitar Conditions” consists of 10 instrumental pieces of great guitar work, showing awesome creativity and despite that 60s lovely feeling that is spread all over, the album sounds so incredibly fresh and not old-fashioned at all! Great musicianship too! The album kicks off with “Spy Romance”, a dynamic SURF (of course) tune, completely 60s influenced, lead guitars and keys are wonderfully and suspiciously blending together creating a surf n’ fuzzy AMAZING instrumental tune and I have to agree 100% with the press release statement: “One of the best instrumental ever written”!!! “Galaxy Cruise”, is just that; a cruise among the stars of the galaxy, space air hostess’s lovely voice is accompanying the listener to a fast surf tune with a fantastic Duane Eddy approach! “Jungle Calling” shamelessly flirts with Dick Dale and has an unbelievable Surfy Spaghetti Western atmos! So Fucking Cool! “Butterfly Valley” overflows of melodic summer surf-guitar passages while “Town Of Shelter” is another BRILLIANT tune with a Super-Cool and Exotic atmosphere that reminds all these golden surf moments by the master Takeshi Terauchi! If there’s a sub-genre called Space-Surf or Surf-Space, then “Crazy Orbits” with its superb Theremin sound, defines that style! “Gulag Party” is another crazy instro that makes you wanna shout “Faster Pussycat Faster!” “Unknown Seas” makes me wonder why is one of my favorites here… It’s a slow tune drenched into PSYCH melancholy… Hmmm… I used that word again… So, no need to wonder why, hehe… “Grand Finale” is also a slow tune with an intense cinematic feeling and a cool vibraphone sound, an ideal soundtrack to accompany 2 souls while they’re waving goodbye to a summer that is ending… Eventually, the album closes with a slightly different version of “Crazy Orbits (English Spaceman)” with some spoken text added towards its end… “Extreme Guitar Conditions” is an Extremely Catchy and Addictive Cool Album! Instrumental, Magical, and Trippy! You can surf in the Sea or you can Surf to the Stars! It’s up to you! Invest! TimeLord Michalis

Listen/Buy through The Aqua Barons Bandcamp

Visit Get That Beat Records Web